First the bad news: We recently learned that the last Dutch grower of the vibrant pink cactus dahlia ‘Radiance’ has quit growing it. That means this spring’s tubers may be the last we’ll ever offer – so if you want this well-named 1950s beauty, now is the time to order it!

Then the good news: Three great dahlias came through winter storage better than expected, so ‘White Aster’, ‘Gypsy Girl’, and the immortal ‘Jersey’s Beauty’ are once again available at our website. Woo-hoo!

We’re limiting ‘Winsome’ and ‘Ehemanii’ to one per customer, and most of these other treasures are also in very short supply – so if you don’t want to miss them, order now!

The right companion can make any plant look better. For bearded iris, here are a few suggestions from two of America’s greatest garden writers.

iris & companions in Wilder’s 1918 Color in My Garden

For June borders that are “a joy indeed,” Louise Beebe Wilder in her 1916 My Garden recommends intermingling iris with “tall blue and white lupines, lemon lilies [Hemerocallis lilioasphodelus], foxgloves, and peach-leaved campanulas, with a background of Persian lilacs and such free-growing roses as ‘Stanwell’s Perpetual’, ‘Madame Plantier’, and the yellow briers – ‘Harisoni’ and the Persian – and edged with double white pinks and Nepeta mussini [catmint].”

John Wister in his 1930 The Iris recommends some of the same plants and adds to the list: “Good garden combinations can be made with a background of Spirea ‘Van Houttei’, Philadelphus coronarius [mock orange], and kerria with lavender iris [such as ‘Pallida Dalmatica’] and salmon pink Oriental poppies.

“Pink iris [such as ‘Caprice’] and ‘Queen of May’ go equally well with this. Gypsophila [baby’s-breath] statice, clove pinks, Nepeta mussini [catmint], Anchusa [Italian bugloss], and lupines are but a few of the many plants that gardeners have used successfully with various irises.”

With their smaller flowers and rugged constitutions, heirloom iris often combine more harmoniously in gardens than modern cultivars do. We’re shipping a dozen of the best for planting in April, and now is the time to order!

“These big yellow daffodils have multiplied and bloomed prolifically for us here,” wrote our good customer Carlos Doolittle, landscape manager at Southeastern Louisiana University, “and I’m hoping you can help me learn their true identity.”

The photos he attached showed a Division 2 or large-cup daffodil with petals a shade lighter than the cup, and he said they usually started blooming in early February.

Since very few “big yellow daffodils” do well in climates that are as hot and wet as it is at Southeastern – which is 45 miles northwest of New Orleans, right on the border of zone 8b and 9a – I was intrigued.

“About a decade ago,” Carlos wrote, “an elderly lady, Mrs. Vertalie Blaylock, of Loranger, Louisiana, shared daffodils with my grandmother. They multiplied rapidly, and I transplanted some to my home and eventually to campus. Everywhere I have planted them, they have multiplied rapidly.”

Since literally thousands of big yellow daffodils have been introduced over the years, at first I worried that identifying this one would be a hopeless task. But after Carlos sent me measurements of its petals, cup, and foliage, and then described its scent as “light, honey-like,” I began to feel more optimistic.

I asked him to send his photos and information to a couple of friends who know a lot more about Southern daffodils than I do, Sara Van Beck of Georgia (and formerly Florida) and Greg Grant of Texas. Happily, we all came to the same conclusion: Mrs. Blaylock’s mystery daffodil is probably ‘Carlton’.

“That’s what it looks like to me,” Greg said, adding that ‘Carlton’ is “the most dependable yellow daffodil” where he lives in north-east Texas.

Sara agreed, and in her book Daffodils in Florida, she says ‘Carlton’ “should be the backbone of any daffodil bed” in the Deep South, partly because it’s “the most resistant (of the large yellows) to basal rot” which can wreak havoc on daffodils in hot, wet soils.

Carlos was happy to finally have a name for Mrs. Blaylock’s daffodil, especially since he’s planning “to eventually have masses of daffodils as a signature of our campus landscapes.” Daffodils, he says, are the perfect choice because “not only do their bright yellow blooms bring cheer during the dreary days of winter, but our campus colors here at Southeastern are green and gold.”

Located in the Hamptons at the far end of Long Island, Madoo (Scots for "my dove") was the home of artist Robert Dash from 1969 until his death in 2013.

Today, under the care of the Madoo Conservancy, it’s “a magical oasis” with several historic buildings – including a barn built in the 1740s that Dash repurposed as his studio – set amid “an enchanting 2-acre landscape” that reflects Dash’s creative spirit and painterly eye. 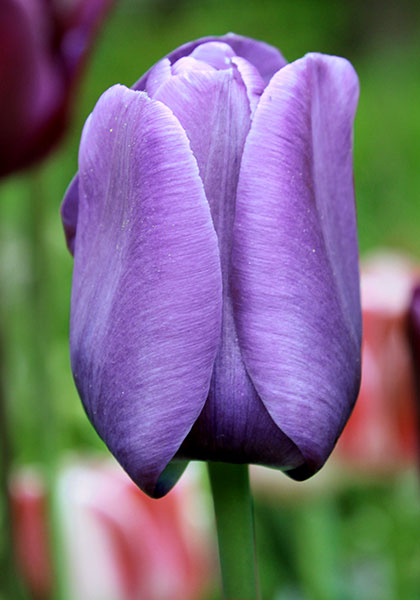 Dash, we’re proud to say, was a customer of ours, and many of our heirloom bulbs still bloom in his gardens today, including three classic tulips that Madoo’s executive director Alejandro Saralegui mentioned recently in the Conservancy newsletter: 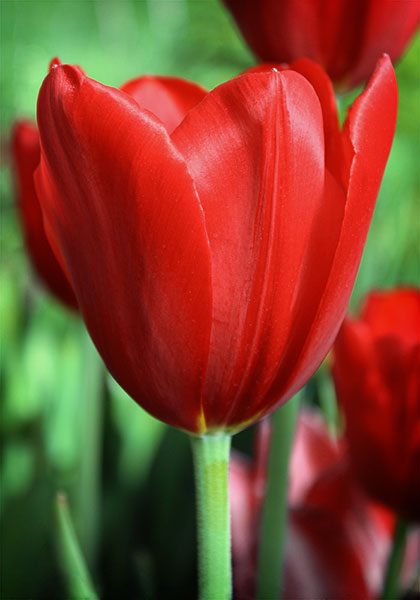 “Soon enough, the tulips that were planted throughout the garden will pop up. . . . “‘Princess Irene’ – with its orange bloom, smoky purple flames, and saffron-like scent – is in the large planters. ‘Kingsblood’ and ‘Bleu Aimable’ are in the quincunx beds.”

For a peek at Madoo’s gardens, see “A Trip to the Madoo Conservancy” or visit madoo.org.

This is a gorgeous book, filled to overflowing with spectacular, full-page images of dahlias that are sure to get a gardener’s heart pounding. Although the text by noted UK garden writer Naomi Slade is perfectly fine, it’s the photography by Georgianna Lane that’s the star here.

I have to admit I’m a little uncomfortable with that. I read garden books to learn things, mostly, but this book is more about getting you excited about dahlias by showing you how incredibly beautiful they can be. And I’d say it works!

That’s ‘Café au Lait’ on the cover, and inside there’s an even more beautiful, two-page spread of a dozen blossoms in all their subtle, rippling, cream-to-pink glory. How anyone could look at that image and not want to grow ‘Café au Lait’ is beyond me.

Sixty-four other dahlias are featured – including heirlooms ‘Clair de Lune’, ‘David Howard’, ‘Fascination’, ‘Gerrie Hoek’, ‘Kelvin Floodlight’, ‘Thomas A. Edison’, and more – each with a one-page description and a luscious, full-page photo or more.

There isn’t a lot of other information, just six pages of dahlia history and botany, six pages about the various forms, a dozen pages on how to grow them – from a UK perspective—and that’s it. But did I mention how beautiful the photos are?

“Dahlias are easy and enjoyable to grow,” Slade writes, and “there are few plants that flower so consistently and splendiferously.” If you already grow them, this book – which is a great value at just $15.50 online – will be a treat. And if you haven’t tried them yet, Dahlias may be just what you need to get started.