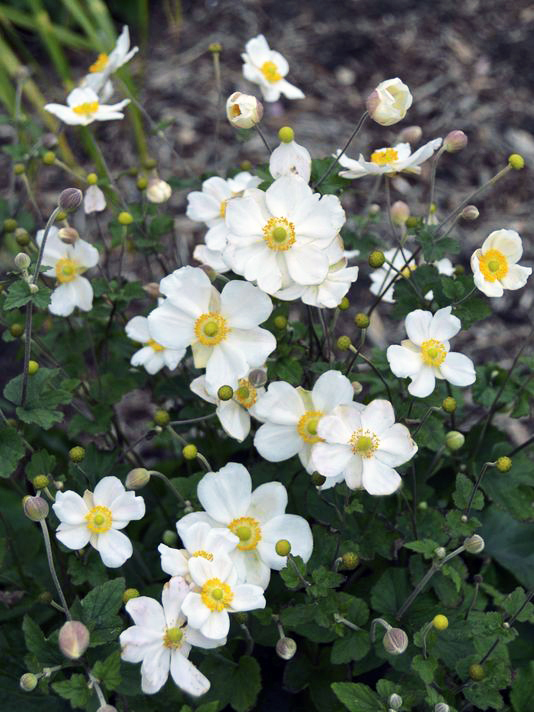 Although it’s not a bulb, the 2016 Plant of the Year of the Perennial Plant Association is an heirloom – and extraordinary.

‘Honorine Jobert’ is one of the oldest Japanese anemones, dating back to 1858. According to William Robinson in The English Flower Garden (1893), it “originated at Verdun sur Meuse in the garden of M. Jobert. From a large tuft of [normally pink] A. japonica, a stem arose with pure white flowers.” Jobert named it for his daughter, and it’s been gracing gardens ever since.

A big clump of ‘Honorine Jobert’ flourishes by the front sidewalk of one of the old houses in our neighborhood, and every fall my wife and I make multiple pilgrimages to it (with Toby, of course) so we can gaze at its exquisite flowers.

A vigorous perennial, ‘Honorine Jobert’ does best in zones 4b-7b, in light shade and alkaline soils that never dry out completely. It can be slow to get established, but once it does it spreads eagerly, it’s deer-resistant, makes a fine cut-flower, and will light up your fall garden. Learn more from our friend Jo Ellen Meyers Sharp, and look for it online or in local garden centers this spring.

Once scorned as boring, gray is now one of the coolest colors around, as anyone knows who’s picked up a shelter magazine or watched a home improvement show recently.

But gray flowers?? Believe it or not, one of the most beautiful iris I know is the luminous, pewter-gray ‘Florentina’, and two of the 20th century’s leading horticulturists agree that it’s something special.

In her 1916 best-seller My Garden, Louise Beebe Wilder called ‘Florentina’ “a charming inhabitant of old gardens” and “one of the loveliest of irises,” and in 1930 the first president of the American Iris Society, John Wister, wrote that it “well deserves all its popularity, as nothing is better either for massing or cutting.”

Wister described its unique color as “pearly white,” and some gardeners see it as a very pale lavender, but to Wilder and me it’s truly gray. Wilder called it “French gray,” a pale gray warmed by a hint of brown or gold, but to my eye it most resembles the silvery gray of softly polished pewter.

‘Florentina’ is “invaluable to us in creating May pictures,” Wilder wrote, no doubt in part because gray goes well with just about everything. She suggested combining it with pink bleeding heart and Single Late tulips, yellow leopard’s bane (Doronicum), and lavender woodland phlox (Phlox divaricata), or planting it “in spreading groups near pink-flowered crabapple trees.”

So, are you cool enough for this gloriously gray beauty? Order a few now for delivery in April!

Bill Seidl of Wisconsin emailed us a while ago looking for a fragrant glad from the 1950s. Although we couldn’t find it for him, he taught us something about why gladiolus fragrance is so elusive:

“From about 1957 through 1967,” Bill wrote, “I hybridized glads with fragrance as a goal. No progress. In 1968, for $200, I imported 20 bulbs of ‘Lucky Star’ from Joan Wright [its New Zealand breeder] and worked at fragrance from that angle. Still no improvement.

“Dr. Robert Griesbach [the famous breeder of lilies and daylilies] worked at it at the same time and gave up after a while. He realized before me what the trouble was: ‘Lucky Star’ has a genetic makeup of AaAa, where A stands for the fragrance gene from Abyssinian glads [which Joan Wright had already discovered were virtually impossible to cross with regular glads]. Unfortunately during meiosis the genes segregate uniformly rather than randomly, which means the pairings are always Aa, never AA or aa. So when you cross them with regular glads, which don’t have any fragrance, the resulting plants are always Aaaa – or in other words, there is always a DECLINE in fragrance.

“At age 83 I do not intend to start over with glads,” Bill added. “But in 1968 I also spent $200 to buy four peonies from Japan, the first intersectional hybrids by Toichi Itoh. That was a better investment. It inspired me to get into peony breeding. Now you can find me on the internet if you type my name and ‘peony’ into any search engine.”

As for ‘Lucky Star’, Bill says he still plants “six corms every year in a pot atop a five-gallon pail, which makes for easy watering,” and he still enjoys its fragrance, which he pointed out is “best sniffed toward evening.” To sniff it yourself, order ‘Lucky Star’ now for spring planting! 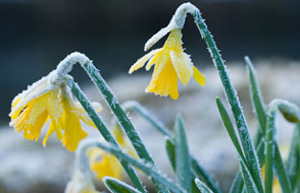 “My bulbs are already coming up! What should I do?” We’ve been hearing that from a lot of customers recently.

The good news is that most plants are tougher than you might think, and they’ve been evolving to cope with erratic weather for millennia.

Most fall-planted bulbs, for example, require a certain number of hours below 40 degrees or so in order to produce enough gibberellic acid to allow the leaves and flower stems to lengthen normally – which means most foliage won’t emerge very far above ground this early. And most bulb foliage and even flowers can take freezing in stride. When temperatures drop below 15 degrees or so, any foliage that’s above ground may be killed, but whatever is still underground will be unharmed and continue growing normally in the spring.

On the other hand, there’s not much you can do to protect your plants from the weather.

You could scatter a layer of loose straw, hay, or evergreen branches over any foliage that has emerged. This will help protect it from the drying effects of winter sun and wind, and prevent the ground from repeatedly freezing and thawing which can damage roots.

You can find other helpful information in the Weather and Hardiness section of our Newsletter Archives, or check out “How Will This Mild Weather Affect Our Plants” at Larry Hodgson’s Laidback Gardener blog.

Other than that, we suggest you just relax, accept that Nature is a lot more powerful than we are, have faith in the resiliency of plants – and maybe make a New Year’s resolution to do something more this year to be good to the Earth.

Make Someone Happy with Our Gorgeous Gift Certificates and Bulbs