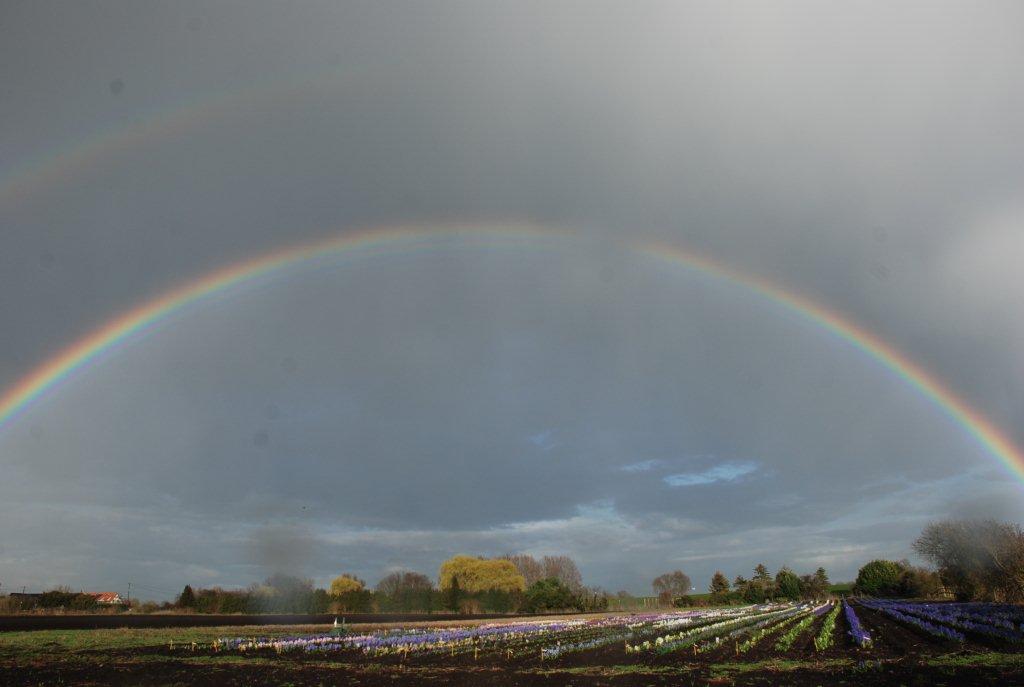 Our friend Alan Shipp, the former potato farmer who supplies us with our rarest hyacinths, emailed us this photo taken by Tim Upson, Curator of the Cambridge University Botanic Garden.

“It’s my hyacinth field after a small shower of rain,” Alan explained, with a double rainbow arching overhead. “Isn’t it stunning?”

Although most experts say gladiolus won’t survive winters colder than zone 8, our customers kept telling us theirs were returning like perennials in zones 7, 6, and even 5.

So we asked our readers, “Have your regular glads survived zone-6 or colder winters? And what do you think made that possible?”

Many replied (thanks!), and now you can read what they said along with our conclusions at oldhousegardens.com/HardyGlads.

Although warmer, shorter winters are probably the biggest reason why so many glads are surviving in colder zones, other important factors seem to include:

plenty of sun, and

the time-tested vigor of heirlooms.

To add your two-cents to the discussion, email help@oldhousegardens.com. And if you’d like to experiment with glads as perennials in your own garden, we suggest starting with the tough little one that our readers recommended the most: ‘Atom’.

“Don’t sub any other flower,” Janet Weymiller wrote on her order for 25 regal lilies, “because my mom uses the petals in an arthritis remedy that really works.”

We’re not doctors, but we know that flowers have been used medicinally since ancient times, and Nature is constantly surprising us, so we asked Janet to tell us more.

“This remedy really does work!” she emailed us. “It doesn’t cure arthritis, of course, but it takes the pain away.

“My mother grows regal lilies in her garden in Iowa. When they bloom and the petals start to turn brown, she takes them off the plant and cuts them up into chunks. Then she puts them into a glass jar and covers them with rubbing alcohol. She lets them sit for one month, drains off the liquid, which turns brown, and rubs the liquid onto the sore arthritic spots.”

The remedy was suggested to Janet’s mom by a local doctor who learned about it from a patient from Russia. Although we’re intrigued and hope it works, please remember that we are NOT doctors and are NOT endorsing it in any way.