In 1820 when it was listed in America’s very first bulb catalog, Indian turnip was the common name for the striking native plant that most of us today call jack-in-the-pulpit. Although its raw corms are poisonous, Native Americans learned to neutralize the poison by roasting or drying them for six months, after which they could be peeled and ground into a flour for making bread.

And here’s another fascinating tidbit: jack-in-the-pulpit can change from male to female and back again. When they’re smaller, plants are generally male, but when environmental conditions are favorable and they grow large enough, they become female, producing seeds in a cluster of bright red berries. The year after fruiting or when conditions are challenging, plants often change back to male until they can build up the strength to set seed again.

This multi-talented native bulb is easy to grow in light shade, and you can order it now for fall planting.

Summer is a great time for visiting other people’s gardens, and if you like historic gardens – or historic parks or maybe even historic cemeteries – there’s a wonderful online guide that will help you find ones close to where you live or travel, including some you probably never even knew existed.

It’s called “What’s Out There” and it’s an ongoing project by The Cultural Landscape Foundation, the country’s leading non-profit devoted to historic landscapes. With it you can easily search for landscapes by location – for example “Michigan” or within so many miles of your zip code – or by landscape type – including garden/estate, botanical garden, public park, golf course, and even roof garden – or by designer, style, or the property’s name.

To find out what’s out there by you, go to http://tclf.org/landscapes and click “Advanced Search” in the list on the right. Or if you’re using a smart-phone, click the handy, GPS-enabled “What’s nearby” button to see everything within a 25-mile radius. And have fun!

To make sure you see our next big Facebook hit, visit us at Facebook.com/HeirloomBulbs and click “Follow” under the “Liked” button near the top of our page. Thank you, and happy gardening!

You might not expect it, but daylilies make fine cut-flowers – or at least our graceful heirloom varieties do. Although an individual flower lasts just one day, buds will continue to develop and open for up to a week indoors.

Way back in 1954, two University of Illinois professors wrote in a USDA booklet that “daylilies have become very popular for home flower arrangements.” They recommended cutting stalks with “several perfect full-blown flowers and a number of well-developed buds,” ideally in the morning when they’re “still fresh and undamaged by wind, sun, or insects.”

“With a little practice, almost anyone can display them to advantage,” the professors continued. “They may be used alone or in combination with other garden flowers and a wide variety of green and dried materials. Delphiniums, gaillardias, gladioli, Japanese iris, Shasta daisies, snapdragons, and zinnias are only a few of the many annuals and perennials that work up nicely with daylilies. Endless combinations can be devised that will brighten up the mantel, party table, or altar. Leaves of caladium, canna, hosta, iris, and peony can be used effectively in place of the natural foliage, as can also the graceful branches of various shrubs and evergreens such as huckleberry, magnolia, rhododendron, and yew, [or] the silvery leaves of artemisia.”

To learn more about using other bulbs in bouquets – from snowdrops to dahlias – visit oldhousegardens.com/BulbsAsCutFlowers . 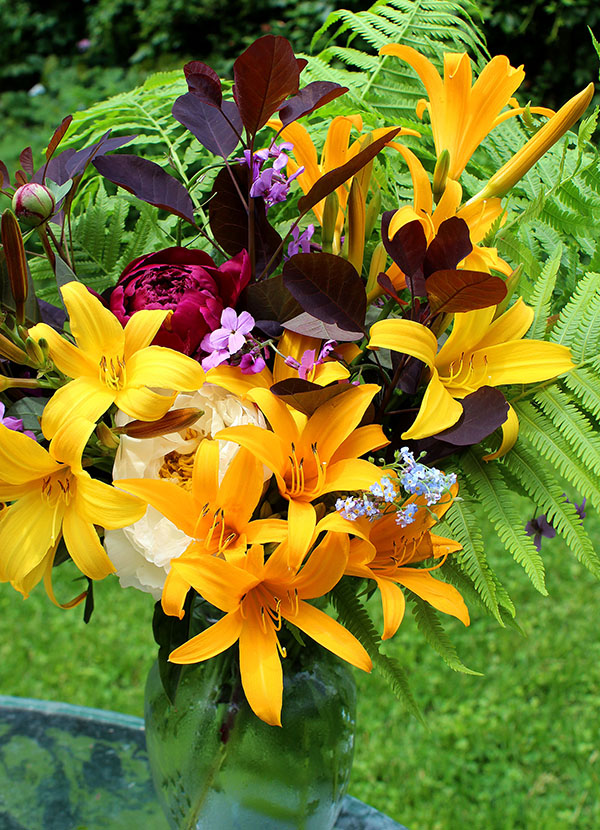 A late May bouquet with extra-early ‘Sovereign’ (left), ‘Gold Dust’ (right), and ‘Orangeman’ (center and top). 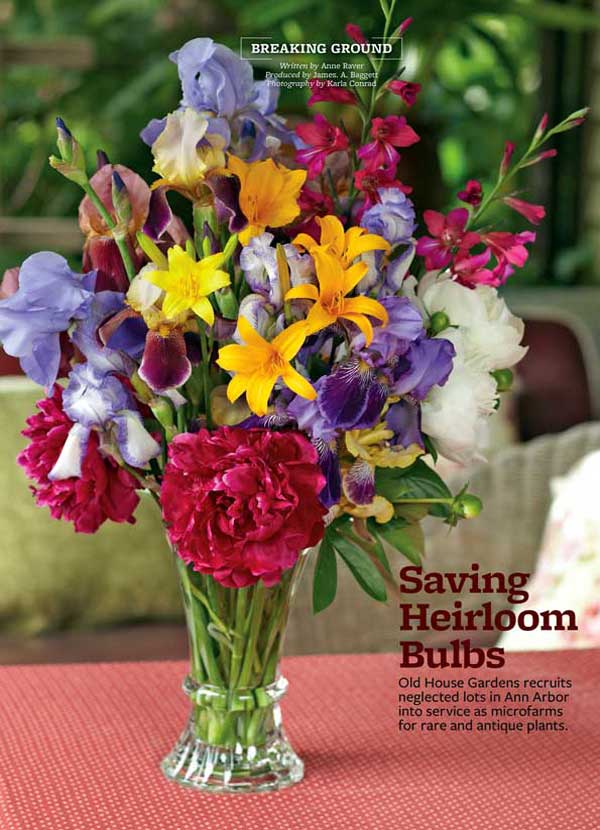 Country Gardens featured this lush bouquet with ‘Orangeman’ and ‘Gold Dust’ in their 2014 article about us.