Although it’s a graceful wildflower with a long history in gardens, the Florentine tulip (T. sylvestris) is also a bit weedy, spreading by underground stolons to produce new plants that can take years to bloom. Two articles in the Wakefield and North of England Tulip Society newsletter gave me a deeper appreciation for both its history and its vigor.

Linda Chapman explains that the Florentine is “a tetraploid (having double the number of chromosomes) which may account for its vigor. It is not native to the UK but is naturalized here, though how it arrived is not known. It could have come with the Romans” or much later with “Flemish, Walloon, or French refugees from 1540 onwards.”

When Linda went searching for Florentines where they’d been reported in the past, she found almost none – until she visited a protected “Site of Special Scientific Interest” in Yorkshire. There along the banks of the River Nidd “there were tulips as far as we could see, literally hundreds of them. It was a truly remarkable sight.”

In a second article, Anita Irehoim writes about the Florentine in Sweden. “Olof Rudbeck the Elder (1630-1702) established the first botanical garden in Sweden at Uppsala and grew the ‘yellow tulip from Bologna’” – an early name for the Florentine tulip. (Florence and Bologna are 50 miles apart.) By 1744 it was naturalized in Sweden, and today it’s still found “especially in grass areas in old gardens and parks but also in forest edges and along [roadside] verges.” Anita says “the best way of getting flowers is to disturb the soil. Dig and turn the soil upside down! It makes some sense since it is . . . a weed of the vineyards.”

Olof Rudbeck’s son was also a botanist, and “one of his best known students was Carl Linnaeus, the man who devised our system of plant nomenclature.” Today Linnaeus’s summer house is a museum and “sanctuary for surviving Linnaean plants. Of the 900 varieties he may have had in the garden, only about 40 remain today – one of which is T. sylvestris.” 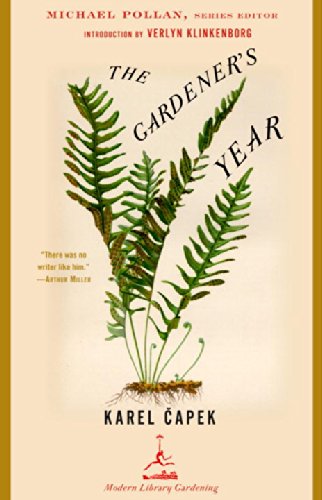 Although the Czech writer Karel Capek (1890-1938) is best known today for coining the word “robot,” he was also an outspoken anti-fascist and an avid gardener. In his 1929 classic The Gardener’s Year he writes:

“It is a popular opinion that in autumn leaves fall off, and I really cannot deny it; I assert only that in a certain deeper sense autumn is the time when in fact the leaves bud. Leaves wither because winter begins; but they also wither because spring is already beginning, because new buds are being made, as tiny as percussion caps out of which the spring will crack.

“It is an optical illusion that trees and bushes are naked in autumn; they are, in fact, sprinkled over with everything that will unpack and unroll in spring. It is only an optical illusion that my flowers die in autumn; for in reality they are born. We say that Nature rests, yet she is working like mad. She has only shut up shop and pulled the shutters down; but behind them she is unpacking new goods, and the shelves are becoming so full that they bend under the load. This is the real spring; what is not done now will not be done in April.” 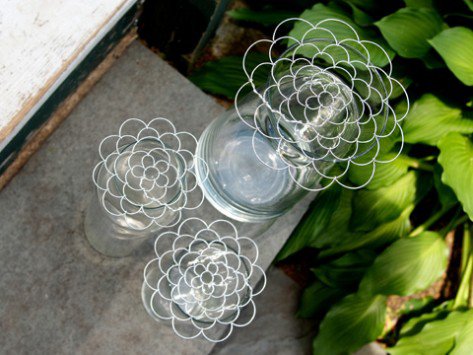 Fresh, local, and almost free, bouquets from your own backyard are one of the great pleasures of gardening. And they’re easy – so I admit I was skeptical when Vanessa brought a little wire doohickey called an Easy Arranger into work one day. It’s a grid of woven wire that fits over the top of a vase and holds flowers upright and in place. Once I tried it, though, I was convinced. This thing really does make bouquet-making easier.

It’s all but invisible, too, and relatively cheap. We ordered a set of three different sizes from thegrommet.com for $12 plus $2.20 shipping. You can find look-alikes elsewhere, but the Grommet sells the original by Annabelle Noel Designs, “a firm with a mission to launch innovative household products designed and manufactured by women. Its founder Anne Cork tapped her jewelry-making skills to create Easy Arranger after being inspired by the tape grids she saw florists using to hold their flowers in place.” Check it out here – and happy bouquets!