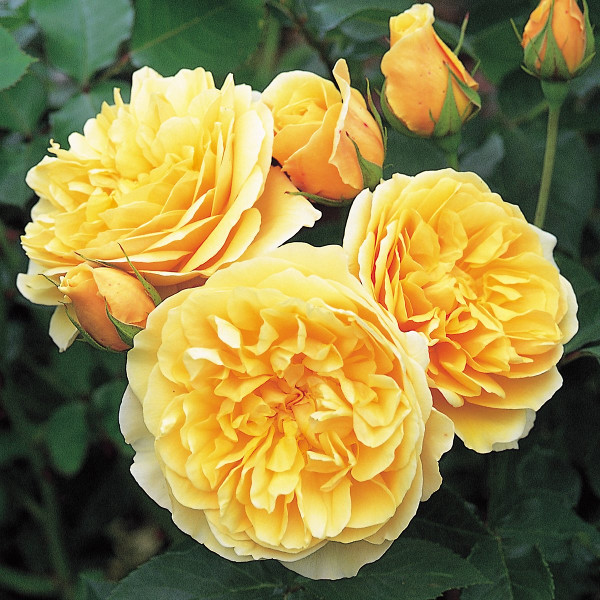 In its December 2019 issue, The English Garden explored how one man’s love of heirlooms grew into a worldwide phenomenon.

“The first David Austin English roses were launched [in 1969] – and the rose-growing world would never be the same. Fifty years later, after the launch of more than 240 cultivars, David Austin and his English roses are household names . . . .

“Yet in the 1960s, Austin was regarded as something of a maverick. The rose industry then was in thrall to hybrid teas and floribundas – they sold in their millions. The established breeders and growers of the time couldn’t understand why Austin was spending his time producing roses that looked ‘old-fashioned’, but he had hit on something. . . .

“Austin had always loved plants, but it was when his sister gave him a copy of E.A. Bunyard’s Old Garden Roses for his 21st birthday that he fell in love with roses and started to grow them – as a hobby at first. Mainly these were old roses . . . , many with wonderful scent and all with a superb, once-yearly flowering display. 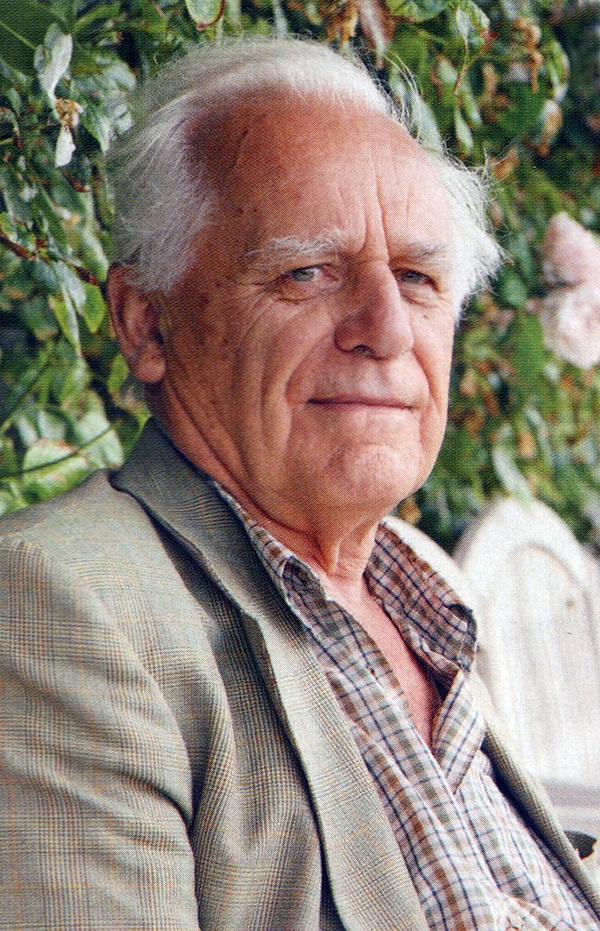 “Growing a few hybrid teas alongside them . . . he recognized they had attributes the old roses lacked. . . . That was when he realized there could be a market for an entirely new rose: one that combined the beauty and fragrance [and toughness!] of the old roses with the more varied colors and repeat flowering of modern varieties. It was the start of a lifelong passion and a breeding project that would go on to transform the rose industry.”

Austin introduced his first rose in 1961, and “in those early years, most nurseries refused to stock his roses. By 1969 when he coined the term English roses . . . he had to supply them to the public himself, packaging the plants on his kitchen table. Competition with other rose nurseries was tough, and it took time for his new style of roses to catch on.

“The breakthrough came in 1983, when Austin exhibited the three roses he was launching that year at the Chelsea Flower Show.” As the nursery’s Michael Marriott explains, “In particular ‘Graham Thomas’ [pictured here] struck a chord with the public. . . . Before that Austin had been a tiny nurseryman in the depths of Shropshire . . . but when ‘Graham Thomas’ was introduced people read about it and came flocking. The other rose growers couldn’t believe it really, this upstart grower who had suddenly got a whole load of attention for this ‘funny’ old rose they thought no one would want.” 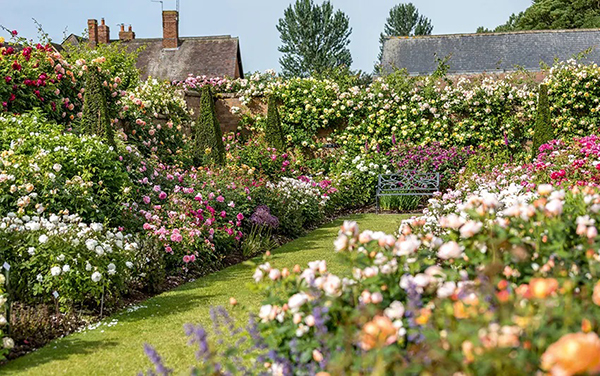 the magnificent Lion Garden at the David Austin Roses nursery

‘Graham Thomas’ is still an enormously popular rose, Austin’s 1986 ‘Gertrude Jekyll’ has twice been voted the UK’s favorite rose, and right up until his death in 2018 at the age of 92, Austin continued to create “new old-fashioned” roses that are beautiful, fragrant, and tough. His incredible success also inspired other breeders to re-imagine what roses could be, leading to the multitude of easy-care “landscape roses” that brighten so many places today where roses would have once been unthinkable.

Not bad for one guy who saw something worth saving in flowers that most other people thought were just old. 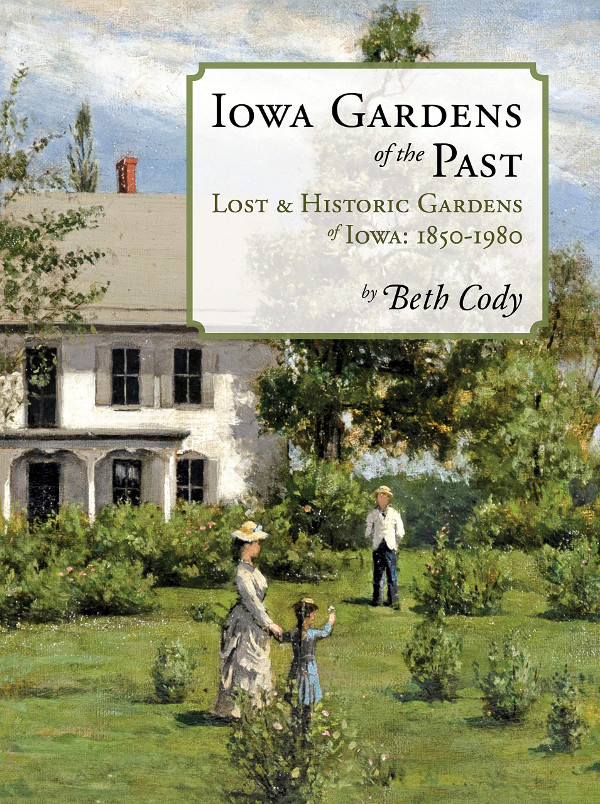 This is a beautiful book, and fascinating – even if you don’t live in Iowa.

Hundreds of antique images fill its 320 pages, including engravings, photos, postcards, garden plans, pages from books and magazines, and catalog art. Most are good-sized, too – 64 fill an entire page or more – which means you can see a lot of details that would otherwise be lost. Immersing yourself in them is an enormous pleasure, and author Beth Cody deserves our thanks for the hundreds of hours she spent tracking them down so we could enjoy them by just turning the page. (See more at iowagardens.com.) 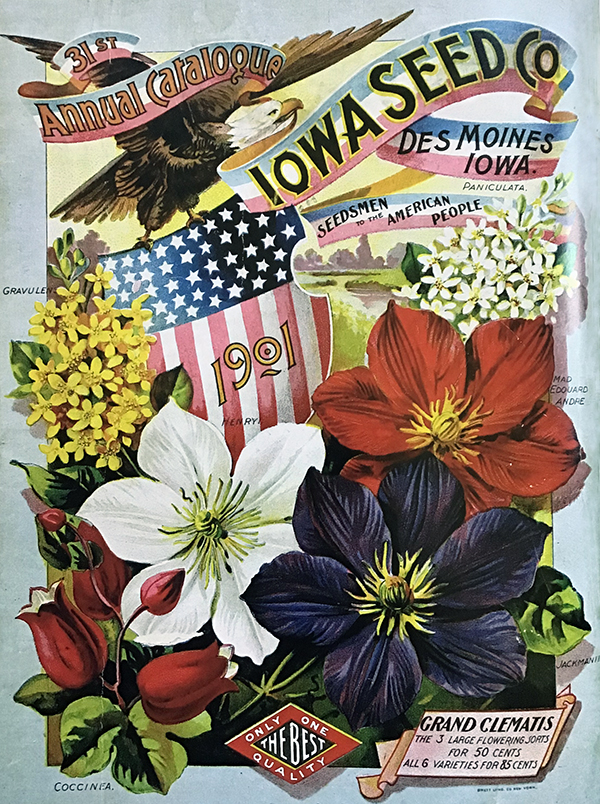 Although many of the gardens she documents are lavish affairs, Cody has also made a point of including the gardens of people who weren’t rich. “Often,” she writes, “it was photos of proud gardeners in their modest flower gardens in small towns and on turn-of-the-century farms that were the most touching to me,” and it’s those images – which are so rarely published – that I often found most interesting.

Iowa Gardens also has plenty of text. For some readers – especially those with an interest in Iowa history – that’s a good thing, but for others it may be a bit daunting. Cody says her main goal was “simply to rescue earlier gardens from obscurity,” and she’s certainly done that well. But I would have preferred fewer details about individual gardens and more about what they show of how Iowa gardens in general – in their layout, fencing, ornament, plants, purpose, and so on – have changed. 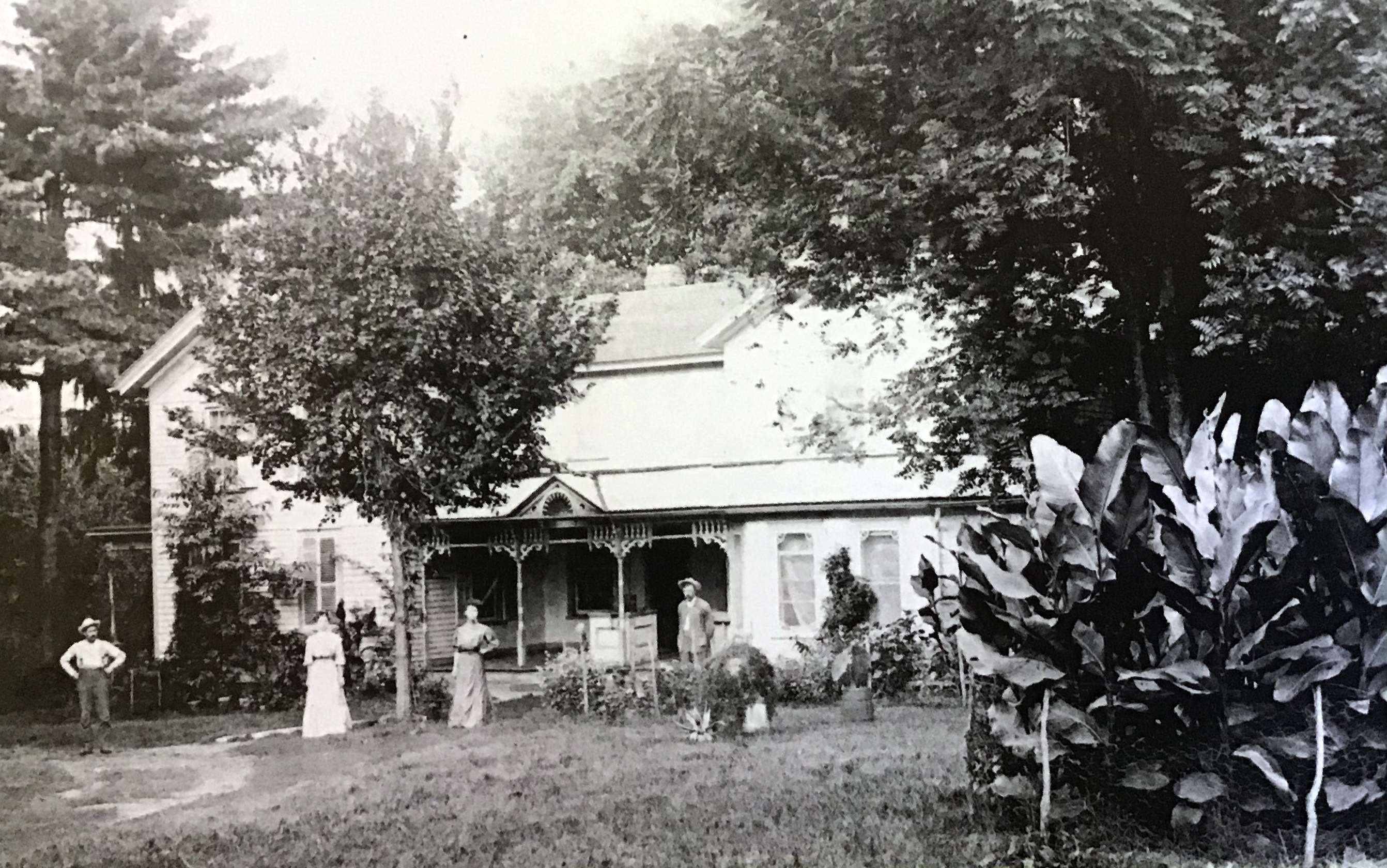 Front yard with cannas protected by a chicken-wire fence
at a cattle ranch near Iowa City in 1910.

That’s not the book Cody set out to write, though, and it’s a minor quibble in any case. In her preface she says that “Iowa is always completely absent from landscape history books,” as if “Iowans have no history of gardening for beauty.” With this dazzling book Cody has set the record straight and enriched our understanding of American garden history. Thank you, Beth, and bravo! 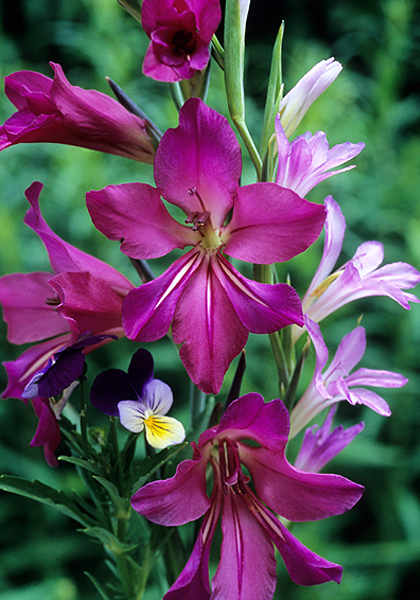 Byzantine gladiolus – “A designer favorite that is changing the perception of this genus,” says Michelle Cain, head gardener at the iconic Sissinghurst Castle Gardens. “Its vivid magenta color partners well with so many other things. I love it with acid greens, such as Euphorbia palustris.” 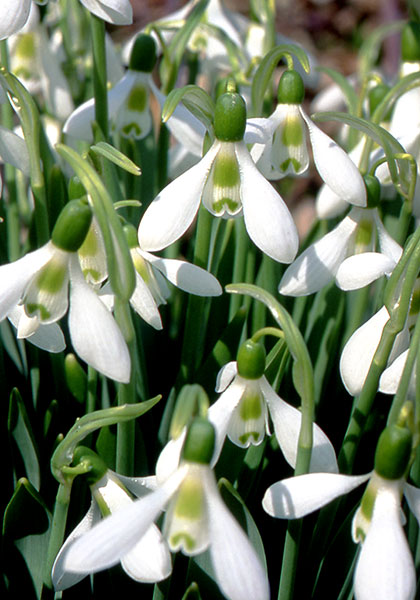 Elwes snowdrop – “Snowdrops are priceless in any garden,” says head gardener Tom Coward of Gravetye Manor, and “this is one of the earliest, showiest, and easiest to establish. It has proved most vigorous at Gravetye” which was once the home of wild garden advocate William Robinson and today is a posh hotel. 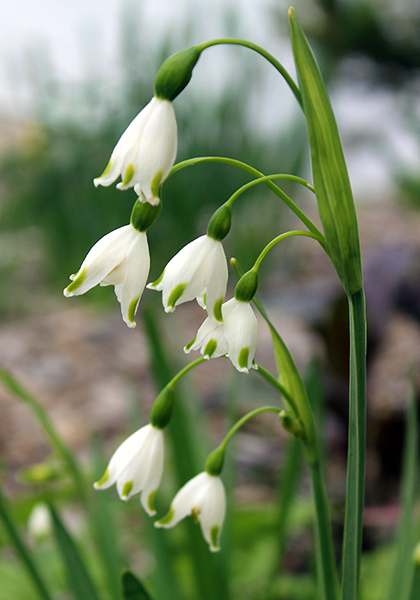 ‘Gravetye Giant’ snowflake – “This very good form of a beautiful [UK] native was selected at Gravetye Manor by William Robinson,” Coward explains. “Particularly robust and long-flowering, it will accept almost any soil but seems to thrive in our damp meadows.”

All of these treasures have won the RHS Award of Garden Merit, too – and you can order them now for planting this fall!