Thanks to all of you who responded to our query about growing pink surprise lilies, Lycoris squamigera, outside of the narrow range we’d been recommending for them. You gave us lots of great feedback, and here’s the short version of what we learned.

ZONES – Many readers told us they’ve had long-term success with surprise lilies in zones 5b and 8a, and for the past couple of years we’ve been getting our bulbs from a third-generation bulb farm in 8a, so we’ve now expanded our zone recommendations to include zones 5b-8a(8bWC).

SOIL – Although well-drained soils are usually recommended for surprise lilies, several readers say theirs grow just fine in clay soil. Clay is dense, though, which makes it harder for bulbs to multiply, and it holds water longer which can cause bulbs to rot.

WATER – Many readers say they never water their surprise lilies, and that may be a good thing. Like most bulbs, they do best when they’re relatively dry during their summer dormancy. Since many of us water our gardens then, this could be one reason they’re often found surviving in lawns and “neglected” areas that get less watering – though of course they do need water when they’re not dormant, from fall through the end of spring. 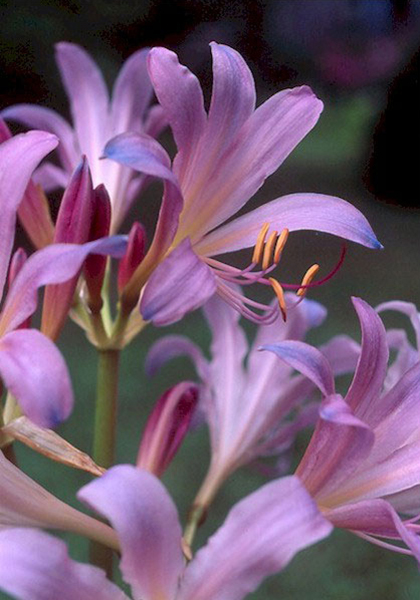 SUN/SHADE – Full sun seems to suit them best, especially the further north they’re planted. But many of our readers said they do well in partial shade, too, especially if it’s from deciduous trees which leaf out later.

PLANTING DEPTH – Some authorities say to plant them with the neck just under the soil surface, but our expert North Carolina grower recommends planting them so they’re covered with 2-4 inches of soil. Since the bulbs we ship are 3-4 inches tall, that means planting them with the base 5-8 inches deep.

LONG WAIT FOR BLOOM – If you dig them from a neighbor’s yard you probably won’t have this problem, but if you plant dry, dormant bulbs you’ll have to be patient. Although most will put up leaves their first spring, sometimes nothing emerges until the spring after that, and they virtually never bloom until their second or even third year.

Thanks again to everyone who helped us “crowd-source” this article! For the longer version, including quotes from customers growing them everywhere from zone-3 Saskatchewan to zone-9 Florida, see our More About Surprise Lilies page.