Learning from You: Growing Pink Surprise Lilies in Zones 5-9

When several of our customers told us their pink surprise lilies (Lycoris squamigera) were thriving in zones colder and hotter than those we were recommending then — zones 6a-7b(8bWC) — we wanted to learn more. So we asked our newsletter readers in zones 5b-and-colder and 8a-and-warmer, “Do pink surprise lilies thrive for you, and how do you grow them?” We got a lot of great feedback (thanks!), and here’s what we learned: 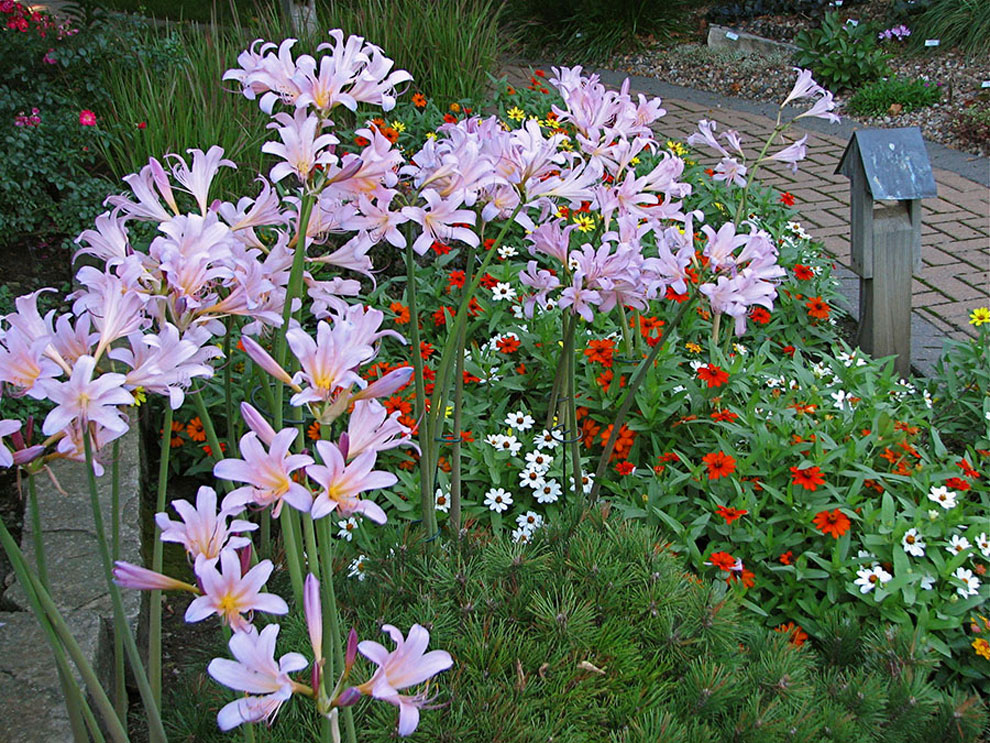 Zones — Many readers told us they’ve had long-term success with surprise lilies in zone 5b and 8a, and for the past couple of years we’ve been getting our bulbs from an old family farm in 8a, so we’ve now expanded our zone recommendations to include zones 5b-8a(8bWC). Learn more in “Zone-by-Zone Feedback,” below.

Soil — Although well-drained soils are usually recommended for surprise lilies, several readers say theirs grow just fine in clay soil. Clay is dense, though, which makes it harder for bulbs to expand and multiply, and it holds water longer which can cause bulbs to rot when dormant.

Water — Many readers say they never water their surprise lilies, and though that may sound like neglect, it’s usually a good thing. Like most bulbs, surprise lilies do best when they’re dry during their summer dormancy. Since many of us water our gardens then, this may be one reason why they’re often found surviving in lawns and “neglected” areas that get less watering. But they do need water the rest of the year, from the time their flower stalks emerge through fall and winter when they’re growing roots until their leaves start to yellow and fade with the approach of summer.

Sun/Shade — Full sun seems to suit surprise lilies best, especially the further north they’re planted. But many of our readers said they do well in partial shade, too, especially if it’s from deciduous trees which leaf out later, allowing the bulb foliage a few weeks to photosynthesize in full sun.

Planting Depth — Some authorities say to plant them with the neck just under the soil surface, but our expert North Carolina grower recommends planting them so they’re covered with 2-4 inches of soil. Since our bulbs are 3-4 inches tall, that means planting them with the base 5-8 inches deep. If your soil is heavy, you may want to plant them at the shallower end of that range, but otherwise 7-8 inches is probably best.

Long Wait for Bloom — If you dig them from a neighbor’s yard you probably won’t have this problem, but if you plant dry, dormant bulbs you’ll have to be patient. Although most will put up leaves their first spring, sometimes nothing emerges until the spring after that, and they virtually never bloom until their second or even third year. That makes it easy to forget where you planted them, so be sure to mark the location clearly to avoid damaging them later or planting on top of them.

Heirloom vs. Modern? — Since so many of our readers told us they got their bulbs from an older relative or neighbor, we’ve started wondering whether their might be an heirloom strain that’s more vigorous and adaptable than the one offered by mainstream sources today, as is the case with red spider lilies. But that’s a question we’re going to explore later.

Zone-by-Zone Feedback from Our Newsletter Readers 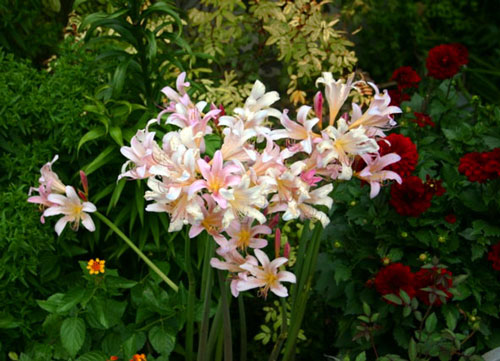 Zone 3 — Proving that where there’s a will there’s a way, Brian Porter of Regina, Saskatchewan, has been growing surprise lilies “for over a decade here. I have them planted on the sunny side of my house, seven feet from the wall. I cover them for winter with plastic garbage bags filled with 6-8” of dry leaves. They have multiplied well over the years and are blooming now.” Brian included this photo and added, “BTW, up here we call them resurrection lilies” — a name that’s especially fitting in zone 3.

Zone 5a — Jerry Eisenhour of Urbandale, Iowa, calls his by another common name, naked ladies, and says “they were in this yard when I got here five years ago and they’re doing just fine.” Doug Stillings says that his father Gene planted some at their cabin near Baraboo, Wisconsin, “fifteen years ago and they’re still thriving. One patch is in a bed with good strong sunlight and rather heavy clay soil. It keeps spreading and trying to crowd out lilies, daffodils, and hollyhocks. The other patch gets no direct sun but flourishes near the base of a giant white oak.” 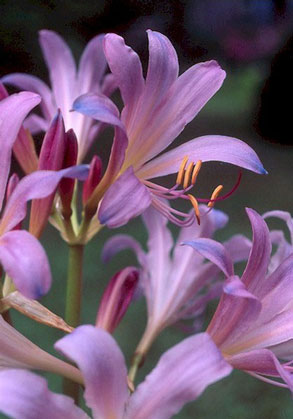 Zone 5b — In Spearfish, South Dakota, Sue White has been growing them for years in “a warmer micro climate near the foundation” on the south side of her house. Carolyn Winkler grew them when she lived in Omaha, Nebraska, where “their lovely blossoms appeared every August,” and Ann in nearby Lincoln reports, “I’ve had pink surprise lilies in the same spot for 20 years. I think they are unkillable! Even the voles leave them alone.” Creonne Issler says her neighbors in Fremont, Nebraska, grow them, and they’re at a house she owns in Phillipsburg, Kansas, where despite a “pretty bad drought the last two years” they bloomed fine this year. Sandra Gerdes of the Better Homes and Gardens Test Garden in Des Moines tells us, “I love surprise lilies and they always generate a lot of comments from visitors, which is why I’m ordering more. I see them blooming in the older, established neighborhoods, too — and we definitely experience the extremes of winter and summer here on the prairie.” Margrit Nitz of Aurora, Illinois, says “they’re very reliable here,” and Paula Fraser of nearby Naperville agrees, saying she’s had hers for twelve years and “they fight it out with periwinkle, erratic or no watering, semi-shade and full baking sun, and come back every year.” Cathy Dunn says, “I see these beautiful flowers all over Indianapolis.” Hers bloomed this year “even after the horrendous winter we had, and even though our soil here has lots of clay and limestone.” Vivian Maroney of Kingston, Michigan, says hers have been flourishing ever since 1995 when her sister in Kansas brought them to her as a house-warming present. And in South Berwick, Maine, Nancy Wetzel reports that “the surprise lilies you sent me a few years ago are doing fine. I planted them in a spread of daylilies, and just when you think things have gotten dull over there, SURPRISE!” 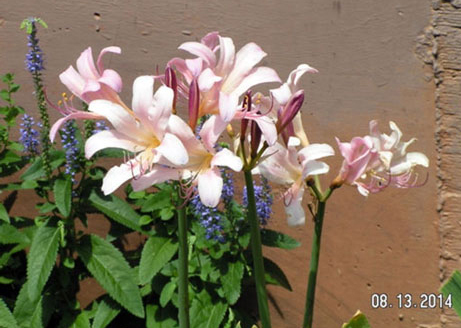 Surprise lilies planted near the foundation in zone-5a Spearfish, SD.

Zone 6a — Nancy Vogel of Lawrence, Kansas, says “the surprise lilies are in bloom all over town,” Jerry Eisenhour tells us his mother grew them in Carrollton, Missouri, and Kathy Tenorio says hers “originally came from my grandmother’s home in rural Missouri. She called them pop-up lilies, and as long as I can remember, she had strips of them growing right in the lawn (never in a flower bed). She never gave them any special care, not even supplemental water during dry spells.” Kim Mattingly’s came from her grandmother, too, who has grown them “for at least 40 years” in the “heavy, rich dark clay” of her northwest Ohio home. “They don’t multiply like crazy,” Kathy says, “but they’re reliable and do create enough extras for her to share them every four or five years.”

Zone 8a — Elizabeth Tucker of Little Rock says, “Many of my neighbors grow them, some with very little care. My friend had some pop up at her new house [in partial sun]. She completely ignored them, but last time I visited they were blooming again.” Jean McWeeney of Ruston, Louisiana, notes that “it was a good summer for surprise lilies here. Might be all the rain and milder temps we had.” Sara Van Beck in Atlanta reports that the ones she’s planted at home in light shade give her healthy foliage but rarely flowers, while at her office she gets “great blooms” from some planted in a dryish spot in “packed clay next to the gravel parking lot against the brick building with full southern exposure that bakes like Texas in spring but in summer is heavily shaded.” The surprise lily bulbs we sell come to us from a third-generation bulb farm in North Carolina, which should have been enough to convince us that they’ll grow fine in 8a. But Cathy Dunn says she “bought and planted them several times” at her former home in Chesapeake, Virginia, “with absolutely NO luck — they just never came up.”

Zone 8b — Heather Verastique of Taylor, Texas, tells us she’s grown surprise lilies for years, and though the foliage always comes up in the spring, they don’t always bloom. Like many bulbs, surprise lilies need a certain number of hours below a certain temperature in order to develop their flower buds — so when the winter is cold and long enough, Heather’s bulbs bloom, but when the winter is warmer and shorter, they don’t.

Zone 9a — James Waters, III, of Jacksonville, Florida, says his bulbs put up healthy foliage but “NEVER bloom.” He has them planted with the tips above the soil line, so we recommended he transplant them deeper, but it may be that zone-9a winters are never going to be cold enough for them to develop flower buds and bloom.

So there you have it. We learned a lot, and we hope you have, too. Thanks again to everyone who helped us “crowd-source” this page, and happy gardening!

You might also be interested in what our customers have taught us about growing crocus in the lawn and traditional glads that overwinter in zones 5-7.