The vast majority of the peonies grown today are cultivars of the Asian Paeonia lactiflora, the first of which arrived here from China in the early 1800s causing a sensation.

But long before the lactifloras appeared, the colonists were growing a completely different species, the European P. officinalis, which had been revered as a medicinal herb since ancient times. (Officinalis means “of the [apothecary] shops.”)

Since they bloom a week or two earlier than the lactifloras, the officinalis clan came to be called May-flowering peonies. Double red ‘Rubra Plena’ was the most popular form, especially in the 19th century when it decorated the graves of so many Civil War veterans that it was called the Memorial Day peony.

But times change, and as the Civil War faded in the past and hundreds of exciting new lactiflora peonies were introduced, the old officinalis peonies gradually fell out of fashion. 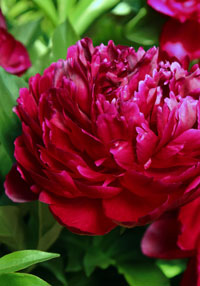 “Today the May-flowering peony is neglected,” wrote the great American garden writer Louise Beebe Wilder in 1927. Yet “in peaceful old gardens that remain unfretted by changing fashions and modern introductions we are apt to find huge bushes of the old May-flowering peony or “piny” as it is called in country neighborhoods. . . .”

Several officinalis peonies grew in the Maryland garden of Wilder’s childhood. “There was the “old crimson” [‘Rubra Plena’],” she wrote, “which is yet one of my favorite peonies and exhibits almost the richest color that I know. There was a full pink sort that we children called the ‘strawberry-ice-cream peony,’ and there was a loose-petalled white one.” When she later bought an old house and garden in New York, Wilder was “happy to find those sweet and wholesome friends of my childhood growing in the tangled dooryard.”

Ancient, herbal, early-blooming, richly colored, and enduring – why not add P. officinalis ‘Rubra Plena’ to your dooryard this fall?