In 1879 a customer wrote to nurseryman James Vick, editor of the popular Vick’s Illustrated Monthly, praising a white dahlia that was “the prettiest thing I ever saw” with flowers that “didn’t look much like dahlias, but more like asters.”

Vick explained that “this class of dahlias is called Pompon or Bouquet,” and added that “there are two very good white sorts, White Aster and Little Snowball.”

But do the neatly rounded flowers of ‘White Aster’ really look like asters? 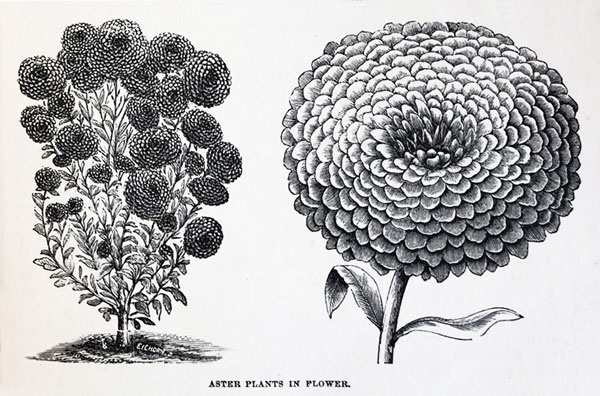 Not compared to the perennial asters that are commonly grown in gardens today, but back in 1879 the most popular asters – by far – were the annual bedding plants known as China asters, Callistephus chinensis. Vick devoted an entire page of his 1872 catalog to images of them, including ‘Imbrique Pompon’, which is pictured here. Although it’s a highly idealized image, I hope you’ll agree that it looks something like a pompon dahlia – and some modern China asters do, too. 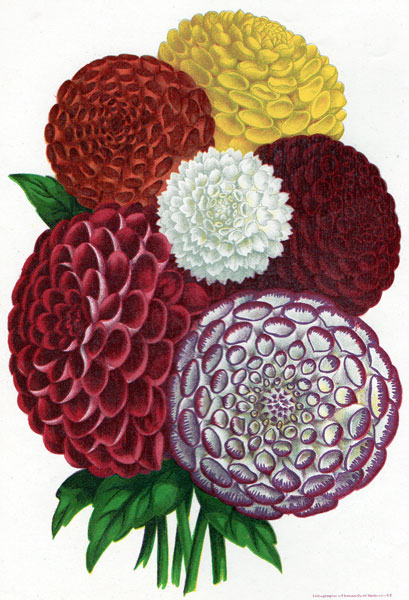 But originally ‘White Aster’ looked even more like an aster because its petals were notched at the tip, making them look narrower, more numerous, and, well, more aster-like. You can see what I mean in this magnificent chromolithograph which was published full-page in Vick’s Monthly in 1878. Although none of the dahlias in the image are labeled, I’m virtually certain that’s ‘White Aster’.

Dahlia genetics are complex and unstable, though, and apparently sometime during ‘White Aster’s long history its DNA reverted to producing normal, rounded petals. (Something similar seems to be happening with ‘Old Gold’, whose petals are sometimes notched and sometimes not.) The change must have occurred sometime after 1956 because the de Jager catalog that year describes ‘White Aster’ as having “lovely laciniated flowers.” Although nowadays “laciniated” refers to the fringe-like petals of dahlias such as ‘Tsuki Yori no Shisha’, its dictionary definition is simply “cut into narrow lobes; slashed; jagged.” 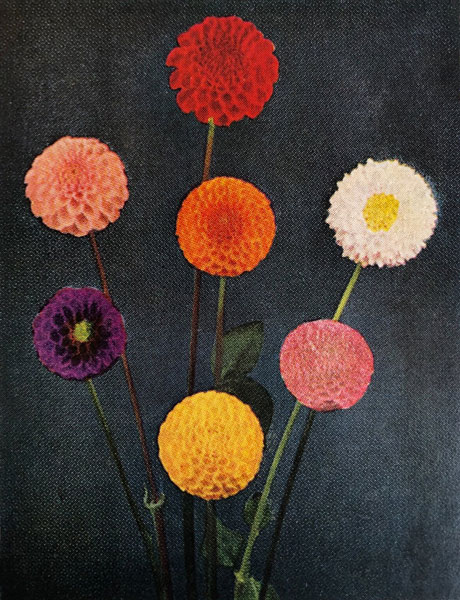 Of course it could be that today’s ‘White Aster’ is simply an impostor substituted for the real thing sometime between 1956 and when we first acquired it 50 years later from one of Germany’s oldest and most respected dahlia nurseries – but, at least for now, I’m willing to give it the benefit of the doubt and believe that it’s the real thing minus the notching.

Could the notching reappear someday? Yes! So please keep your eyes peeled and if you ever find a notched bloom on your ‘White Aster’, contact us ASAP. With a little luck we might be able to root a cutting and eventually re-introduce the original, more aster-like ‘White Aster’.

(Thanks to garden historian Thomas Mickey who inspired this article and shared the amazing chromolithograph with us. Read his blog post “Victorian Dahlia ‘White Aster’ Still Shines” and more at American Gardening.net.)