Daffodils, tulips, and most other bulbs multiply naturally underground by producing offsets or daughter bulbs. Roman hyacinths do, too, but – after centuries of breeding – traditional garden hyacinths multiply so slowly on their own that bulb growers long ago developed ways to speed up the process.

The techniques described below by Liberty Hyde Bailey in his 1896 Nursery Manual would have been familiar to bulb-growers a century earlier and are still standard practice in the Netherlands today. 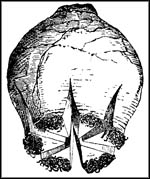 Bailey starts by explaining that “bulbels are often produced by an injury to the bulb. Growth of stem and leaves is more or less checked and the energy is directed to the formation of minute bulbs.” It’s the bulb’s natural reaction to injury that growers take advantage of in multiplying hyacinths.

“The favorite method is to make two or three deep transverse cuts into the base of the bulb [image 1]. The strongest bulbs should be chosen, and the operation is performed in spring or early summer, when the bulb is taken up.” 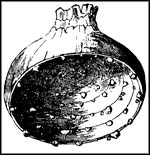 In another method, “the bulbs are hollowed out from the underside for half or more of their depth [image 2]. This operation is sometimes performed later in the season than the other, and precaution should be exercised that the bulbs do not become too moist, else they will rot. . . .

“The mutilated bulbs are stored during summer, and are planted in fall or spring. The wounded bulbs produce very little foliage, but at the end of the first season the bulbels will have formed. The bulbels are then separated and planted by themselves in prepared beds.

“Several years are required for the bulbels to mature into flowering bulbs. Some of the strongest ones may produce flowering bulbs in three years, but some of them, especially those obtained from the hollowed bulbs, will not mature short of six years.”

Could you do this at home? Of course – and now’s the time for it. If you do, please share your story (and photos) with us. Good luck, and have fun!