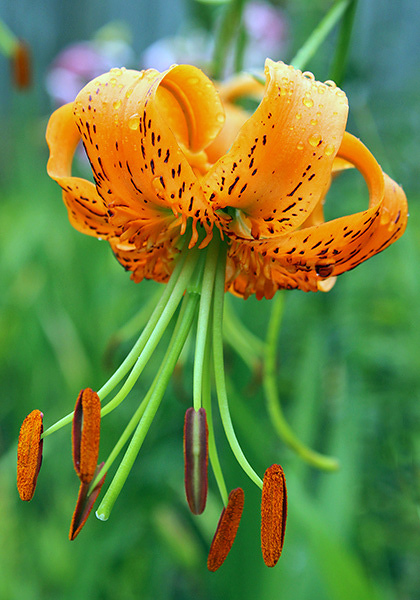 We gardeners love to share our love of gardening, don’t we? Whether it’s a fresh-picked bouquet, a start of a favorite plant, or simply a helpful tip, many of us have learned that sharing can make gardening even more fun – as it has for our good customer Randy Merrill of Colton, New York.

“I gifted one of your lilies to a friend,” Randy emailed us last month. “With that one lily, his first, he has turned into an expert on lilies and has taken on the science of the little red lily beetle which eats lilies. He has a garden full of hybrids and whenever I visit he takes me on a tour to give me updates on each of them, then ends the tour saying ‘Look what you’ve done to me!’ I have spent many hours assisting him with his experiments, and he has even published papers on this little red bug in science journals.

“Last spring, I found a red lily beetle in my garden. My friend didn’t believe me, said it was too early. Thirty minutes later he showed up in my garden and had to give me credit for adding evidence that these critters appear earlier in the year than anyone realized.

“I also told him where some lilies are growing in the wild near here [in the six-million-acre Adirondack Park]. He thinks it might be a variety that has never been discovered, and if so he says he will name it after me.”

So if you ever read about a newly discovered lily named Lilium merrillii – or maybe L. randyi? – remember that it all started with Randy giving her friend one of our amazing lilies.

(P.S. You can order all of our lilies right now, and five of them are spring-shipped!)