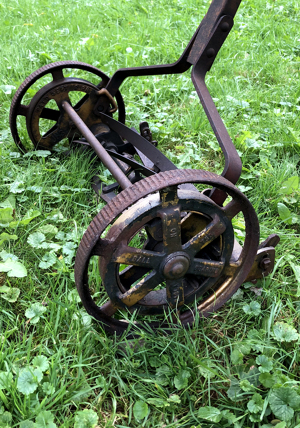 My neighbor Mark was cleaning out his garage when an old lawn mower caught my eye.

“That’s cool,” I said. “Do you want it?” he asked and – me being a fan of all things garden-historic – of course I said yes.

But how old was it? With its cast-iron wheels and smooth wooden hand-grips, I figured it dated to maybe the 1930s or ’40s, but I soon found out that I had a lot to learn about mowers.

The first lawn mower was invented in 1830 by Englishman Edwin Budding who was inspired by a machine that trimmed the nap off cloth. Before that, most lawns were cut with scythes – if they were cut at all – which was time-consuming and expensive.

Budding’s mower was a hit. “It promises to be one of the greatest boons that science has conferred on gardeners in our time,” wrote the era’s leading horticulturist, John Claudius Loudon, adding that wealthier land-owners could now “indulge in a garden luxury which, if they had to procure it by manual labor, would probably long remain beyond their reach.” 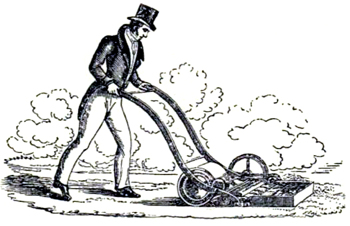 Budding’s mower, with large roller in back, single side wheel, and grass-catcher tray in front

The first mower to reach the US arrived in 1850, imported by a wealthy garden-lover for his Hudson River estate. Five years later his enterprising mechanic was building and selling the first American-made mowers.

“Side-wheel” mowers like mine were patented in Philadelphia in 1869, and the design has changed little since then. Unlike earlier mowers which used a roller in back to turn a large wheel on one side which then spun the cutting blades, these simpler new mowers used a pair of smaller wheels set on the sides to power the blades.

Since side-wheel mowers were lighter and had fewer moving parts that could go wrong, they soon became the most popular style. By the 1890s, they were being produced by scores of small factories throughout New England and the Midwest.

A paper label glued to the handle of my mower reads “Van Camp Hardware & Iron Company, Indianapolis,” so at first I figured that’s who made it. Then I discovered a patent date cast into one of the wheels – Sept. 12, 1899 – and traces of red and gold paint on the wheels and iron arms.

Those clues led me to the former Lawn Mower Capital of America and helped me learn a lot more about my mower’s history – which I’ll share with you in a future newsletter.