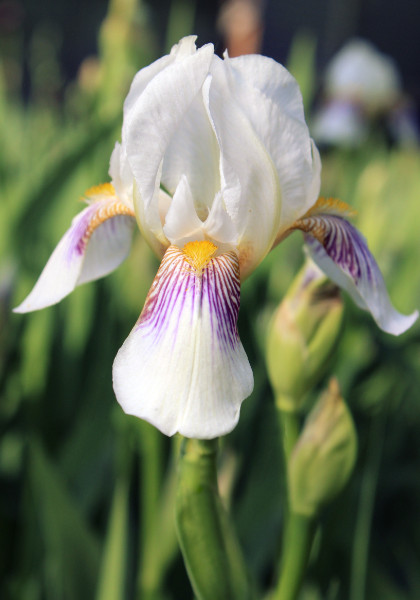 To enjoy the lovely little iris known as ‘Mrs. George Darwin’ you don’t have to know anything about the woman it’s named for – but you might like it even more if you do.

“Martha ‘Maud’ du Puy was born in Pennsylvania on July 27, 1861,” writes Mike Unser in the Historic Iris Preservation Society’s fall 2018 Roots. “Although the family was not particularly wealthy, her father was descended from French aristocracy and became a well-known doctor….

“One of five daughters, Maud was said to be a bright child and grew to be a local socialite, well regarded by friends and family. She was always receptive to new experiences, and in 1883 she eagerly accepted an invitation from her Aunt Cara to visit her in England.”

There she met the astronomer George Darwin. “George was one of several sons of the famous English naturalist Charles Darwin and … a professor at Cambridge. Though he was 15 years her senior, George was smitten by the witty and charming young American woman right from the start. Maud, however, was not so easily swayed by this small, nervous gentleman and initially rebuffed any ideas that she should consider him as a suitor. 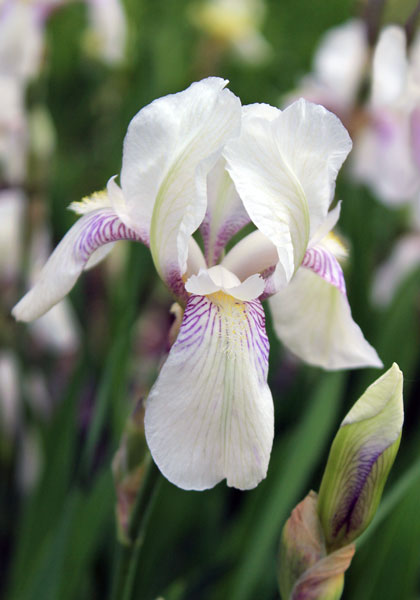 “It was in the course of traveling England and Europe with her beloved aunt that she came to know George better, as he often joined them in various locales to show them around…. He was smart and witty, kind and generous, and as time went on she came to see all his good qualities. He was obviously very taken with her, so [even though she’d said no to other suitors] when he proposed, she accepted, much to the delight of her Aunt Cara.

“She and George went on to raise four children … and they lived a happy life together. She later became Lady Darwin when her husband was knighted in 1905.

“It was during the years at Cambridge that she made the acquaintance of Sir Michael Foster and became the namesake of one of his beautiful irises, along with her sister-in-law, Ida, the wife of George’s brother Horace [see ‘Mrs. Horace Darwin’]. Maud lived a long life, passing away at the age of 85 in February 1947.”

‘Mrs. George Darwin’ is one of a dozen heirloom iris we’re offering this spring, but seven are already sold out (sorry!) so if you want any of them, please order soon!