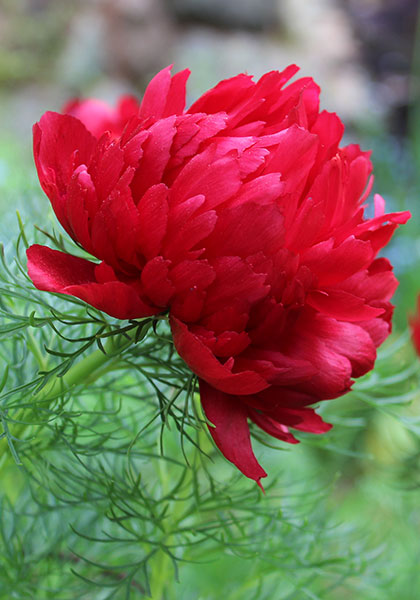 “Peonies play a significant part in the omnium gatherum of June odors,” Louise Beebe Wilder wrote in her 1932 classic The Fragrant Path. “Peonies do not, of course, all smell alike, and many of them have practically no smell at all. Few of the single kinds are markedly sweet-scented, nor are [most of the red ones]. The purest and most delicious quality of scent is found in the various pale pink varieties [such as ‘Mrs. Franklin D. Roosevelt’ and deeper-pink ‘Edulis Superba’] and in the white and blush-colored kinds [such as ‘Elsa Sass’].

Beebe also claimed that Paeonia tenuifolia, the fern-leaf peony is fragrant. This surprised me because I’ve grown it for years and never noticed that – so if you’ve sniffed it, please let us know what you found.” Several Paeonia species have fragrant flowers,” she wrote, “among them the little red flowered P. tenuifolia, from the Ukraine called the Adonis peony because of the similarity of its feathery foliage to that of the Adonis. It is a charming little species, suitable for and in harmony with the rock garden as well as for border life. It is the first of its race to bloom and after the flowering is past and seed has matured, the plant dies to the ground and is seen no more until the following spring. So mark well its dwelling that you may not injure it in digging about.”