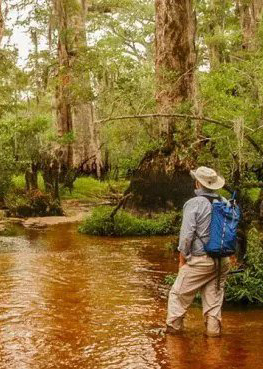 According to scientists from the University of Arkansas, a bald cypress (Taxodium distichum) growing in North Carolina is 2624 years old, making it the oldest living thing east of the Rocky Mountains and one of the oldest trees in the world.

And it isn’t alone. “There are hundreds of 1,000-year-old trees throughout the Black River swamp forest,” says scientist David Stahle who used core samples and radiocarbon to date the cypresses. “We think there are older trees out there still.”

Awe-inspiring in their own right, these ancient trees also offer a precipitation record in their tree rings that Stahle calls “amazingly accurate and detailed.” Along with modern droughts, the rings document “the severe multi-year droughts of 1587-1589 associated with the disappearance of the Lost Colony of Roanoke Island, and the drought of 1606-1612 concurrent with the hardships suffered during the early years of the Jamestown Colony.”

To read more or watch a short video about these remarkable heirlooms, visit newsweek.com/2624-tree-north-carolina-swamp-oldest-planet-1421844.