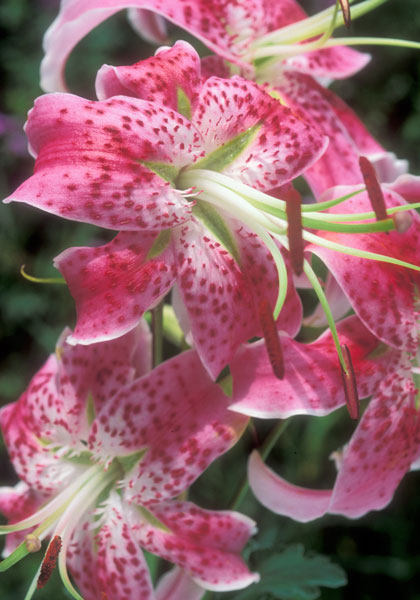 But that’s just one reason he loves it, he writes in the June 2020 Quarterly Bulletin of the North American Lily Society. Another is that “it blooms late, in mid- to late July and even into August, extending the lily bloom season for us and providing a much-appreciated spot of color during the heat of summer.”

Also “L. speciosum is known for its virus resistance,” Chuck adds, “as noted by lily breeder Judith Freeman in discussing her Hall of Fame lily ‘Anastasia’ which has some L. speciosum ancestry.” It’s also thought to be in the DNA of Leslie Woodriff’s ‘Stargazer’. It certainly is an ancestor of Woodriff’s famous ‘Black Beauty’” (which we ship in the fall.)

“The most famous L. speciosum cultivar is ‘Uchida’ [which we ship in April]. It is named for Hirotaka Uchida of Japan, who grew and exported bulbs before World War II…. Uchida particularly liked L. speciosum rubrum and selected and cultivated the best forms.

“With Japan’s attack on China and the start of World War II, flower fields in Japan were discouraged in favor of food production. Uchida and his son safeguarded a small cache of L. speciosum clones, however. After the war, when lily bulb exports resumed, the Uchidas exported 60 bulbs to the West.”

The tough, rose-tinted beauty the Uchidas had nurtured for so long “won a gold medal in 1963 at the Internationalle Gartenbau Ausstellung garden exposition in Hamburg, Germany” and before long had become one of the world’s most popular lilies – one that you could enjoy in your garden this summer by ordering now!