We knew that ‘Blue Parrot’ tulips were featured in the redesign of the White House Rose Garden initiated by President Kennedy in 1962 (see “JFK’s Garden”), but thanks to a tip from a friend, we’ve now learned a lot more about that iconic garden – and we’re celebrating with a brand new sampler of five fabulous tulips that bloomed for Kennedy there.

Located just outside the Oval Office, the Rose Garden has a long history, but by Kennedy’s time it was woefully neglected. He re-envisioned it as a flower-filled ceremonial space for welcoming foreign dignitaries, hosting major press conferences, and so on, and he enlisted the remarkable Bunny Mellon to turn his vision into reality. 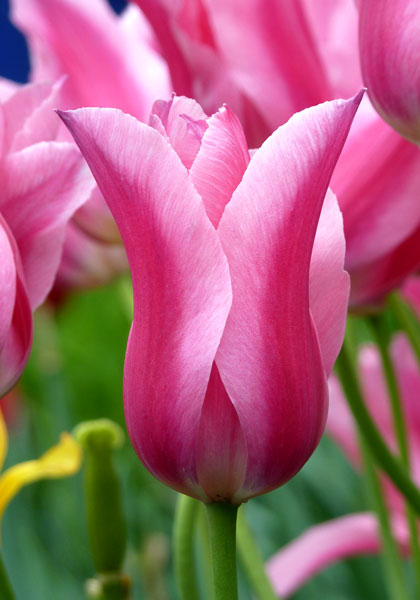 Mellon was a philanthropist, art collector, and avid amateur gardener. Her redesign featured an open lawn surrounded by boxwood-edged flower beds and four great saucer magnolias transplanted from the Tidal Basin. Kennedy was intimately involved in the development of the garden and, having read Thomas Jefferson’s garden diary, urged Mellon to include plants in it that Jefferson grew. “It was truly President Kennedy’s garden,” Mellon said later. “His concern for its growth and well-being was never ending.”

See photos and learn more about the Rose Garden’s long history at the White House Historical Association’s website or – for even more – treat yourself to a copy of the summer 2015 issue of White House History which is devoted to the topic.

And now with our brand-new “Springtime in Camelot” sampler, you can enjoy five of the tulips that bloomed in Kennedy’s garden. We’ll send you three bulbs each of lavender ‘Blue Parrot’, dark maroon ‘Black Parrot’, flamingo-pink ‘Fantasy’, rose-pink ‘Mariette’, and ‘White Triumphator’, all for just $25. No matter what your politics, this beautiful sampler deserves your vote!

Return to your search results.