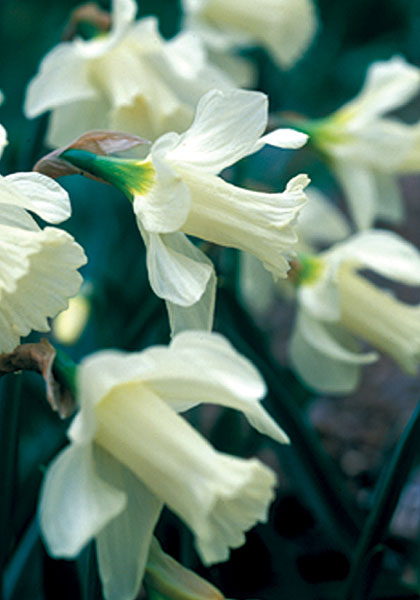 Elizabeth Lawrence, the revered Southern garden writer, had a great interest in heirloom plants, searching for them in rural “market bulletins” and researching them in old books. In this 1971 newspaper column (later collected in Through the Garden Gate), she weaves together her own observations with those of fellow daffodil-lovers from almost a century before:

“Many years ago Carl Krippendorf lent me William Baylor Hartland’s Original Little Book of Daffodils (1887), the first catalog ever to be devoted entirely to daffodils. Hartland, an Irish nurseryman, said white trumpets were a specialty at Temple Hill, his place near Cork, and he listed nine varieties. One of these was ‘Colleen Bawn’. ‘No daffodil is more pure white,’ he said, ‘or so easily recognized by its broad twisted propeller-like perianth segments, and long cylinder-like trumpet.’ It is described in A. M. Kirby’s Daffodils (1907) as ‘a gem among white daffodils, silvery-white, drooping, nodding flowers; gracefully twisted petals. Best when grown in shade and grass.’ 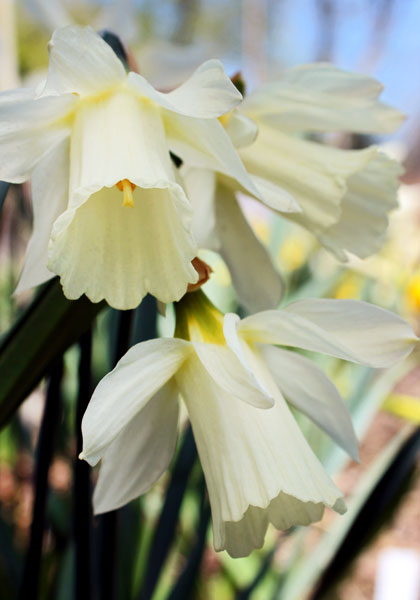 “’Colleen Bawn’ is still with us, though extremely rare. . . . It is very like the other small trumpets of its day, the silvery swan’s neck daffodil, Narcissus cernuus (now called N. moschatus), and the silver bells of old gardens, but the very narrow, very long trumpet distinguishes it from the others. The trumpet is distinctly yellow though very pale, at first, and the segments are fawn color. The second day it lifts its bowed head to a horizontal position, and both trumpet and perianth become silver white. It has a delicate fragrance.

“In One Man’s Garden, Miles Hadfield quotes from a letter that [daffodil breeder] George Herbert Engleheart wrote about these old trumpets: ‘Away back in the 188os and 1890s I was collecting old forms of white daffodil, chiefly from Ireland. Miss Curry — some years dead — used to hunt them up from old Irish gardens, and a small club of three or four of us used to share them. They were all white things of the ‘Colleen Bawn’ type, but varying in size and form. They didn’t take kindly to cultivation, and are mostly, I think, lost. I made some attempt to discover their history, and came to the conclusion that Irish religious houses must have had some connection with Spain and Portugal — the focus of the white species.’ 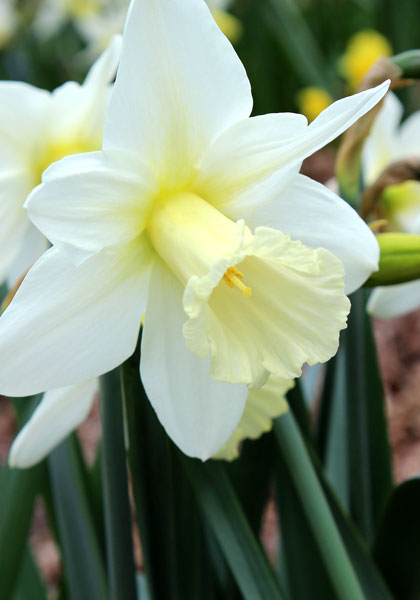 “. . . From these beginnings Engleheart developed ‘Beersheba’ (1923), still to me the most beautiful of all white trumpets, and very early, usually blooming the first week in March. Engleheart described it as a ‘miracle of stately loveliness,’ and was vexed when [daffodil breeder] P. D. Williams criticized the trumpet as 1/4 inch too long.”

Another great old white trumpet is ‘Broughshane’, although it’s sturdy and handsome rather than graceful. See all the white trumpets we offer — and if you’re thinking of ordering ‘Colleen Bawn’, we encourage you to do it NOW because savvy gardeners have already snapped up over half of our very small supply for this fall.

We love it when our customers use the “Special Requests and Feedback” section of our online order form. That’s where Gaye Ingram of Ruston, Louisiana, made this plea:

“If possible, I would like to order ten moschatus, even though the limit is five. I’ve missed it every year by ordering late. Saw it decades ago and fell in love with it. I’m well past retirement age and would like to see a wee colony in my lifetime. Thank you for considering my request.”

Being soft-hearted souls, we said yes, and when she replied, Gaye told us this story:

“Thank you! I’ve pursued that particular bulb (or what I believe is that bulb) since 1968. Not even 25 years old but with degrees almost in hand, my husband and I arrived in Ruston that year to teach literature (me) and history at Louisiana Tech. We found a sweet little 1930s house that had belonged to the mother of the chair of the Interior Design department. We felt like grown-ups!

“In spring, tiny little cream-colored daffodils with nodding heads sprang up on the lawn. I’d grown up in Central Louisiana among people whose yards and gardens were filled with passalong plants and bulbs, but I’d never seen such a demure spring bulb. I marked them and vowed to dig one or two in the fall.

“Then we moved to another place, and built a new house. I searched ever after for those quiet creamy bulbs. Went back to the place where we’d lived, but the owners had seen no bulbs. Without care and probably having their leaves mowed in late spring, they’d given up the ghost.

“The next time I saw them was in Celia’s grandmother’s garden. [Ed. note: Our good friend Celia Jones owns a small farm near Shreveport where her grandmother once grew acres of daffodils.] Celia had only a few, and knew only a local name for them. Sometime later, when I discovered Old House Gardens, I talked with Scott, but back then you didn’t offer them and he couldn’t be sure about their exact identity. More recently, whenever you did offer moschatus I ordered too late. (One has to discipline herself to order bulbs when it is 95 degrees with 80% humidity, as it is here today!)”

We sent Gaye’s bulbs to her last week, but we’re still not sure whether our Dutch-grown moschatus – or the very similar ‘Colleen Bawn’ – is exactly the same as the once widely-grown heirloom she’s seeking. Daffodils are enormously varied, and the differences don’t always show up in photos. For example, the Dutch-grown N. jonquilla of mainstream catalogs looks very much like the heirloom N. jonquilla ‘Early Louisiana’ that we offer, but the Dutch jonquils bloom weeks later and never thrive as well in Southern heat. (Learn more.)

But we’re hopeful that Gaye now has the sweet little daffodil she fell in love with almost 50 years ago – and if you happen to be growing the beloved Southern heirloom known as goose-neck, swan’s neck, or silver bells, we’d love to hear from you!