“Have you read The Hidden Life of Trees ?” my friend and former micro-farms manager Lynden Kelly asked me. “It’s mind-blowing!”

So of course I had to give it a look – and I completely agree, it IS mind-blowing. 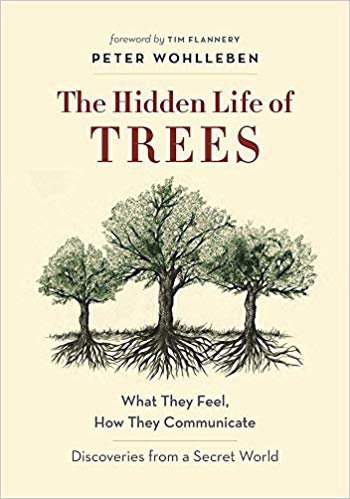 If its subtitle What They Feel, How They Communicate sounds a bit wacky to you, I have to admit that I felt the same way at first. But once I started reading the book, I couldn’t stop, and checking online I discovered that, although some scientists criticize the way author Peter Wohlleben expresses things, nobody says he’s a lunatic.

Wohlleben is a professional forester who manages a large forest for a small town in Germany. In the book’s first chapter, “Friendships,” he describes how he discovered that some moss-covered “rocks” in his forest that he’d walked by for years were actually the remains of an ancient tree stump, five feet in diameter. And here’s the mind-blowing part – despite having no leaves and therefore no way to feed itself, the tree was still alive, decades after it had been cut down, fed by its younger “friends” through the vast web of roots and fungi that connects trees underground.

As I read on I found myself saying “oh wow!” over and over again. In “The Language of Trees,” for example, he talks about how African acacias pump toxins into their leaves the moment giraffes start feeding on them. The giraffes move on to other trees, but scientists wondered why they always moved some distance away before they resumed feeding. It turns out the chewed-on trees release ethylene gas which, when it reaches nearby acacias, causes them to start pumping toxins into their leaves, too. Oh wow, right?

But is it actually “language,” you might ask. Wohlleben argues that even humans use scents to communicate – hence the multi-billion dollar fragrance industry – and that to understand the incredibly diverse world of living things we need to broaden our definitions of concepts such as “friendship” and “language.” After reading Hidden Life, I think he’s right.

Wohlleben also has an informal, almost chatty writing style which makes his book highly readable. If you’re a plant-lover, I think you’ll find it a mind-blowing treat.