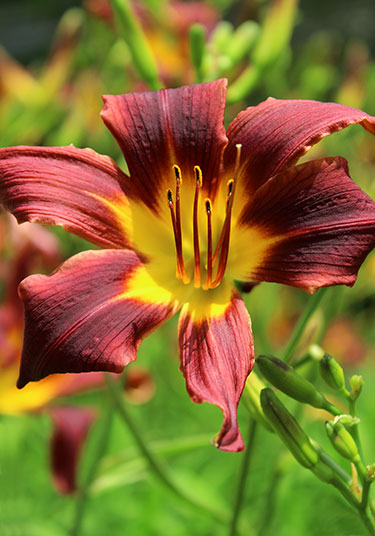 Every now and then we’re reminded of the very real people in the mostly forgotten past of our heirloom flowers.

Recently, for example, first-time customer Amy Turner of Wainscott, NY, added this note to her order for 25 ‘Theron’ daylilies: “My great grandmother, Martha Prentice Strong, a great gardener and friend of A.B. Stout [the pioneering daylily hybridizer], selected and named this daylily after her husband, Theron Strong. I look forward to a garden of Therons!”

Intrigued, we turned to Google and discovered an obituary for the remarkable Mrs. Strong published in the Journal of the New York Botanical Garden where Stout worked.

One paragraph explained that the daylily was actually named for her son rather than her husband: “Another of her absorbing horticultural interests was the daylilies developed by Dr. A. B. Stout. From the first, she was enthusiastic over them, and for more than twenty years she maintained a collection of named varieties at [her home] ‘The Dolphins.’ In 1941, this collection of more than 100 kinds was transplanted to the old Clinton Academy (now a museum) in East Hampton, where it will be maintained by the Garden Club of the town. The name ‘Theron’ in memory of her son, was given by her to the first dark red clone of Hemerocallis developed by Dr. Stout, at his invitation.” 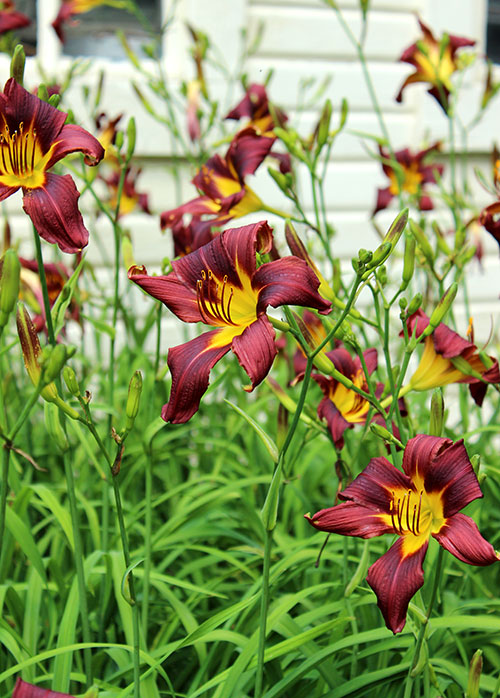 “Oh, Uncle Theron!” Amy said when I called with the news. Her father’s uncle, Theron Roundell Strong was a lawyer, head of Manhattan’s homicide bureau, and a lieutenant in the artillery during World War I. Amy’s family still has the diary he kept during the war, and she especially remembers his entry on Armistice Day, 1918: “The guns are silent. I’m heading to Paris to marry May” — and a week later they were wed.

As for Mrs. Strong’s daylily collection, Amy says it survived until recently when the garden club ripped it out to plant wildflowers, a painful example of how historic plants are often lost to whatever’s currently in vogue in the garden.

Here in Ann Arbor this year, ‘Theron’ opened its first flowers on Independence Day — which I believe Theron Strong would have appreciated.