“Only fools view their gardens in monetary terms…. The real point of a garden is to increase the value of our lives.”

Gladiolus Capital of the World

Laughing in the Garden

Time is Running Out! Save 10-25% Now Before Everything is Gone! 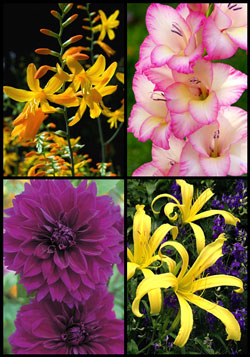 Spring has finally arrived here in Ann Arbor, the hyacinths and early daffodils are blooming, and orders have been flying out the door.

To help the last of our old beauties find good homes, most are now marked down 10-25%. Choose from:

3 lilies, including (thanks to our grower sending us extras by mistake) subtle but strong ‘Guinea Gold’;

6 samplers, including our ever-popular Intro to Heirlooms – with at least $35 worth of heirlooms for just $27!

See them all at our Bulbs on Sale page. 18 other treasures are still available at full price, but none will last long – so order now for your happiest summer ever!

When Fort Meyers was the Gladiolus Capital of the World 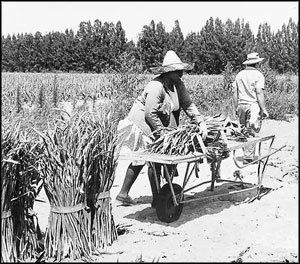 Once upon a time, sunny Fort Myers, Florida, was not just a popular vacation destination, it was also the gladiolus-growing capital of the world, with local farms shipping some 500 million stems a year to florists throughout the US and overseas.

It all started in 1935 when two successive winter freezes in central Florida drove gladiolus growers further south to the Iona area just outside of Fort Myers. Within a decade, 30 growers were cultivating some 2500 acres of glads there.

Gladiolus at the time were hugely popular. Not only were they showy and easy to grow but their long vase life made them the perfect cut-flower. Every year gladiolus societies across the country displayed thousands of spikes in shows that drew tens of thousands of visitors. (See a 1921 glad show here.)

Harvesting the Fort Myers glads started in November and continued into June. According to one grower’s son, “The glads were cut before they bloomed, so a visit to the gladiolus farm was a view of acres and acres of green stalks with workers walking through the fields and cutting stalks with buds soon to bloom. The goal was for the stalks to bloom in the hands of the florist.”

Bundled and packed in hampers, the glads were shipped by air and then delivered by a patchwork of local truckers, all in an era before UPS and FedEx. Sometimes they traveled in the climate-controlled trucks of Purolater Courier whose main business was delivering celluloid film reels – which could burst into flames if they got too warm – to movie theaters.

Even in the Fort Myers area, growers sometimes needed to protect their crops from frost. At first they burned old tires to create heat and a protective blanket of smoke. (Don’t try that at home!) Later they turned to oil-fired heaters along with crop dusters to circulate the air over the fields.

Nothing lasts forever, though, and by the 1970s most glads sold in the US were being flown in from overseas where both land and labor were cheaper. One by one the Fort Myers growers sold their fields to developers, and by 1980 the area’s reign as the gladiolus capital of the world was just a memory.

To learn more, read the recent article in the Fort Myers News-Press.

To make your yard the gladiolus capital of your neighborhood, order now for spring-planting!

When is a Tuber Not a Tuber?

Although virtually everybody calls them tubers, we recently learned that dahlia tubers aren’t really tubers. In a letter to American Gardener magazine, University of Nebraska horticulture professor Paul Reid explains:

“Once again I write to chide your authors and editorial staff for misapplication of the word ‘tuber.’ It should never be used for referring to the fleshy underground structures of dahlias, sweet potatoes, and probably not for daylilies. . . . They are not tubers!

“Tubers are underground stems, with nodes, internodes, and buds – the ‘eye’ of the potato tuber, for example. Tuberous roots are simply roots that are modified for food storage, but are decidedly not stem tissue.”

He’s right. Dahlia eyes sprout from the crown which connects the stem to the swollen storage roots. If a root breaks off without a piece of the crown, it can never sprout because it has no eyes.

Don’t worry, though. Even the American Dahlia Society calls them tubers, so it’s okay for you do the same. Informal language is often different from scientific language, and if you start calling your dahlias “tuberous roots” you’ll just annoy your friends.

But facts matter, and now you know.

In his UK National Collection of Dicentra, Roger Brook grows 30-40 different kinds of bleeding hearts from all over the world. Although we offer just one – Dicentra cucullaria, Dutchman’s breeches – we were happy to read in the May 2018 issue of The English Garden that it’s Roger’s “current favorite.”

Dutchman’s breeches is “a diminutive, early flowering species from mountainous areas of northeastern United States and Canada,” writes author Val Bourne. “It has been grown in Britain since the early 18th century and was thought to have been sent by the Quaker botanist John Bartram (1699-1777) to Philip Miller at the Chelsea Physic Garden.”

“The exaggerated, heart-shaped flowers led the Menominee Indian tribe of Wisconsin to use this plant as a love charm,” Bourne adds. Another common name for it is “stagger weed, alluding to this plant’s toxic effect on livestock and presumably people” – which is good news for gardeners because it means that it’s deer-and squirrel-proof.

Although in his Yorkshire garden Brook says that “wet winters and slugs” make it “difficult to keep in the ground,” in colder gardens here in the US it’s usually easy to grow. In fact, I once dumped out what I thought was a pot of empty soil in a shady spot in my Ann Arbor garden and every spring since then a little colony of Dutchman’s breeches has been blooming and spreading happily there.

To see what a treat this native gem can be in your garden, order it now for fall delivery.

Laughing in the Garden with Arlo and Janis

Check out the first day at www.gocomics.com/arloandjanis/2018/04/16, and then click on the right arrow under the strip to continue the fun.

Did You Miss Our Early April Newsletter? Read It at Our Website or Blog

Early April’s articles included Rita’s easy dahlia starting tips, seeking the lost daffodils of Rev. Engleheart, peony-scented dish soap, and more. You can read all of our back-issues at oldhousegardens.com/NewsletterArchives – and we’re adding the best articles to our blog!

Please help us “Save the Bulbs!” by forwarding our newsletter to a kindred spirit, garden, museum, or group. Or if a friend sent you this issue, SUBSCRIBE here!