“All art is but imitation of nature.”

Peonies, Lilies, and Stroopwafels, Oh My! – Our Trip to the Netherlands

Although spring is definitely the best time to visit the Netherlands, we’re always way too busy shipping and planting bulbs then, so it was the first of June before Vanessa, Rita, and Justin got there – but they still found plenty to see and enjoy.

LILIES – They arrived just in time for Lily Days which is when Dutch lily farmers and hybridizers showcase their lilies in vast greenhouse displays for potential buyers that come from around the world.

“Opening the doors to the greenhouses,” Vanessa told me, “sent your nose into a frenzy with the powerful fragrance of a thousand lilies all blooming at the same time.” Although most were modern varieties, some heirlooms were also on display including ‘African Queen’, ‘Golden Splendor’, ‘Pink Perfection’, and (for spring planting) gold-band and Henry’s lily (pictured here with Justin).

PEONIES – Since it was peony season they also saw a LOT of peonies, and an impressive number of these were heirlooms. “Walking through the peony fields was almost like visiting a museum,” Vanessa said, “and the care taken to grow these plants is inspiring.”

Justin said he “liked all of them” and was constantly “imagining where to use such a wide variety of colors, shapes, and sizes” at his house. He was also impressed by how many of the Dutch devoted “a small chunk of their backyard – maybe 2000 square feet or so – to growing peonies for cut flowers.” 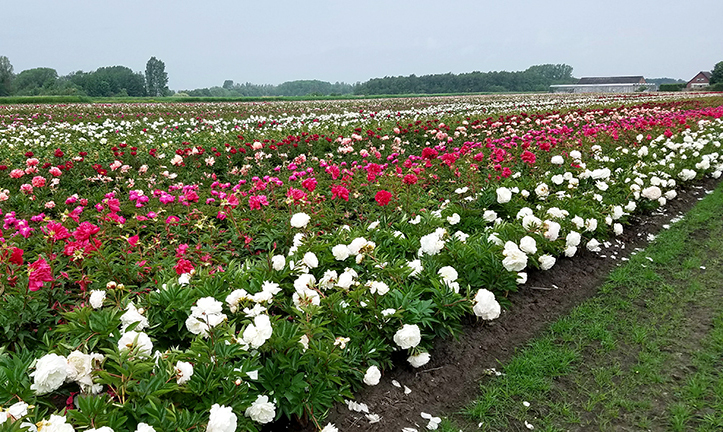 SMALL GROWERS – Just like in the United States, small farms in the Netherlands are slowly being swallowed up by larger operations. But just like here, young Dutch farmers are finding new ways to make small farming work.

One of these farmers is Jan Hein. As Justin explained, he’s “a young grower, close to my age. He grows a few things for us now” – including ‘Prince of Austria’, ‘Phillipe de Comines’, and ‘Zomerschoon’ – but he wants to grow much more.” Vanessa told me that “because Jan plants fewer than 500 bulbs of each of these varieties, they are all dug by hand and processed through an antique-looking machine.” Justin added that “his dad was a bulb grower so he grew up a farmer, and he loves the history and special characteristics of heirloom bulbs. For us at Old House Gardens, this is good news. We need motivated and passionate people to help us save these bulbs.”

ART, BIKES, STROOPWAFELS – Of course there’s more to the Netherlands than flowers. Rita “loved the country’s bicycle culture” and was “amazed by the bicycle parking lots, including the Fietsflat which holds 2500 bikes.” She also said they “made quite an adventure out of sampling all the wonderful foods of the Netherlands. One night we waited in line for over ten minutes to have a freshly made stroopwafel (pictured here). I skipped the chocolate dip and extra toppings and just went for the basic version. YUM!”

Justin said he especially liked seeing the work of the Netherlands’ greatest artists, Rembrandt and Van Gogh. Both were “masters of preserving a moment in time with incredible depth and clarity,” he said, and – deep-thinking nature-lover that he is – he added that “heirloom flowers have a unique connection to the past in a similar way. They are the result of the creative works of nature and humans’ adoration of nature.”

That’s the driveway to Martha’s home in Bedford, New York, flanked by a 300-foot-long pergola. Wisteria and clematis drape the pergola and along its sides are six-foot-wide borders filled with crocus, grape hyacinths, alliums, and various perennials in shades of “mauve, lavender, violet, purple, and blue.”

But Martha wanted more color, so first she “sprinkled in a few kinds of orange poppies” and then to extend the bloom season she planted hundreds of tiger lilies (Lilium lancifolium). Now “just as everything else begins to fade” these lilies “explode into fat rows of tall, sturdy stems” and then “unfurl their spotted petals at the end of July, transforming the border into a sweep of orange.”

See more at themarthablog.com/2018/08/my-blooming-lily-border.html – and then if you want to see what a little orange can do for your mid-summer garden, order a few of these easy, enduring lilies now for planting this fall.

“Monarchs in the Rough” – Golfing for Butterflies 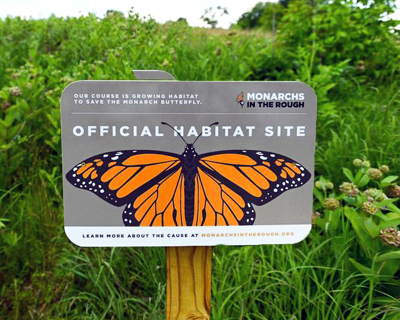 Can we save the monarchs?

Populations of America’s favorite butterfly have plummeted 90% over the past 20 years but a new program is hoping to change that by planting milkweed – and raising awareness – at golf courses around the country.

Co-sponsored by Audubon International and the Environmental Defense Fund, Monarchs in the Rough “connects and supports golf course staff as they plan, install, and manage habitat projects” for monarchs. Along with providing “regionally-appropriate milkweed seed” to establish “about one acre of high-quality monarch habitat,” the innovative program also offers “signage, posters, and technical guidance to golf course managers as they install and manage habitat, and as they communicate with course members about their efforts to save the monarch.”

Doesn’t that sound great? To learn more, or to enlist your favorite golf course in the program, visit monarchsintherough.org/.

Tulips, Dahlias, and the Silk Weavers of London

According to an 1840 article in the Manchester Guardian, Spitalfields got its start in 1685 when France revoked the rights of Protestants and “at least 50,000 refugees, most of them weavers and other craftsmen, arrived from France and threw themselves upon the charity of the English nation.” Known as the Huguenots, these refugees were soon “very flourishing” and by 1713 the silk trade they established “had attained such importance that upwards of 300,000 persons were maintained by it.”

By 1840 Spitalfields was “in a greatly fallen-off condition” but it still retained “a remnant of the love of gardening among the weavers.” A six-acre plot had been divided into 170 small gardens, all separated by picket fences, and “in almost every garden is a neat summerhouse, where the weaver and his family may enjoy themselves on Sundays and holidays, and where they usually dine and take tea.” (Doesn’t that sound lovely?)

Although some weavers grew “cabbages, lettuces, and peas,” most had “a far loftier ambition” – flowers. “Many had tulip beds, in which the proprietors not a little gloried, and over which they had screens which protected them from the sun and from the storm” – to keep the blooms in prize-winning shape for the competitive tulip shows – “and it was expected that the show of dahlias for that season would not fail to bring glory to Spitalfields.”

Although all of the dahlias from that era are now extinct, you can still grow some of the very same tulips that were popular in 1840 such as ‘Absalon’ (pictured here), ‘Keizerskroon’, and ‘Zomerschoon’ – and you don’t have to be a silk weaver to enjoy them.

(You might also enjoy the book this article is drawn from, Notes from the Garden: A Collection of the Best Garden Writing from the Guardian (2010), edited by Ruth Petrie.)

Did You Miss Our Last Newsletter? Read It at Our Website or Blog

You can read all of our back-issues at oldhousegardens.com/NewsletterArchives – and we’re adding the best articles to our blog!