“There is no gardening without humility, an assiduous willingness to learn and a cheerful readiness to confess you were mistaken. Nature is constantly sending even its oldest scholars to the bottom of the class for some egregious blunder.” [So just keep studying and enjoy it!]

– Alfred Austin, English poet laureate, in The Garden That I Love, 1894

Has Our New Catalog Reached You Yet?

We mailed them Aug. 29, and if you’ve ordered bulbs from us any time since fall 2015 (three catalogs ago), yours should arrive soon.

Bulk mail can take up to two weeks, though, and sometimes a catalog gets lost. If you don’t have yours by next Wednesday, Sept. 12, simply call or email us at help@oldhousegardens.com and we’ll rush you another one by first-class mail. We don’t want you to miss it!

If you want any tulips this fall, order early. The Dutch harvest was lousy again, and virtually all are in short supply.

Garden editor Melissa Ozawa recommends just three bulb sources in the September issue of Martha Stewart Living, and we’re proud to be one of them.

In an article titled “First Dibs on Fall,” Melissa writes that “while it’s not quite bulb-planting season yet, unusual varieties such as heirloom tulips and certain fritillaries tend to sell out early and quickly – so it’s a good idea to prepurchase them now.”

Martha and Melissa have been customers and fans of ours for many years, and we are forever grateful to them for their support! 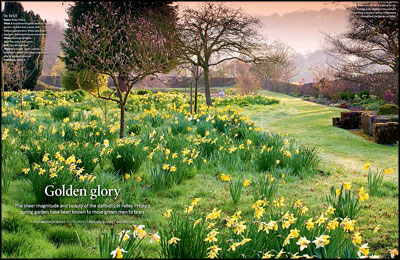 Featured on the cover of Gardens Illustrated, Felley Priory’s Daffodil Orchard is the “crowning glory” of its “renowned gardens” – and filled with nothing but heirlooms.

The Priory has been in the Chaworth-Musters family since 1822, but most of the daffodils were planted in the 1940s. Since then, many of their names had been lost, so the Priory asked three experts – including our friend Ron Scamp – to help identify them.

Among those they recognized were ‘Beersheba’, ‘Mrs. R.O. Backhouse’, ‘Trevithian’, ‘Van Sion’, and ‘W.P. Milner’, but many others “were deemed to be natural hybrids . . . or old cultivars whose names have been lost.” Nameless or not, the Priory’s daffodils were so impressive that the experts “were spotted standing under an old pear tree, dabbing their eyes with their handkerchiefs, overwhelmed by the magnitude and beauty of the display.”

The article also includes photos of “12 Great Cultivars for Naturalizing,” which you can view at our blog. We offer eight of them: ‘Bath’s Flame’, ‘Beersheba’ (“attracts the notice of all by its glittering whiteness,” said the great E.A. Bowles), ‘Croesus’, ‘Lucifer’, ‘Mrs. R.O. Backhouse’ (named by breeder Robert Backhouse in memory of his wife), ‘Sulphur Phoenix’ (“double flowers of bright lemon and pale cream with good weather resistance”), ‘Van Sion’, and ‘W.P. Milner’ (named by breeder Henry Backhouse for his brother-in-law).

Even if – alas! – you don’t have an old orchard, you can start your own magnificent display of long-lived heirloom daffodils by ordering now for October delivery. 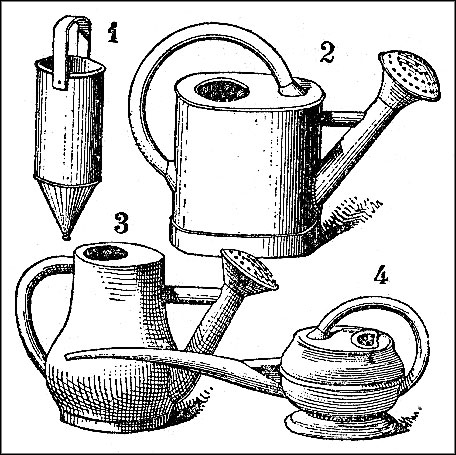 Water is an essential part of life – especially the life of gardeners. If you spent too much time this past summer dragging the hose around like we did, this excerpt from John Evelyn’s 1686 Directions for the Gardener at Says Court is for you.

“The best water,” Evelyn wrote, “is from rivers and running streams [rather than from a well or spring] so it be not too lean and cold.

“That which is always standing or shaded corrupts and is not good, but the water of ponds, and wherein cattle soil, is excellent, [and] rain water has no fellow.

“If water be too thin and poor, enrich it with the dung of sheep or pigeons by hanging a basket full of it into the water and letting it steep. Cow dung is also profitable. [However] water over-dunged brings a black smut on orange leaves, etc.

“If you be necessitated to use cold raw spring water, let it stand a while in the sun, and therefore keep always ready an infusing tub or vessel. Four gallons of heated water qualifies 20 gallons to milk-warm.”

Who knew water could be so complicated, eh? But as you may have already discovered – and Evelyn’s gardener probably wanted to tell him – you don’t have to do everything perfectly to have a wonderful garden. Hopefully yours made it through the summer just fine, even if you didn’t water it with milk-warm, dung-enriched river water. 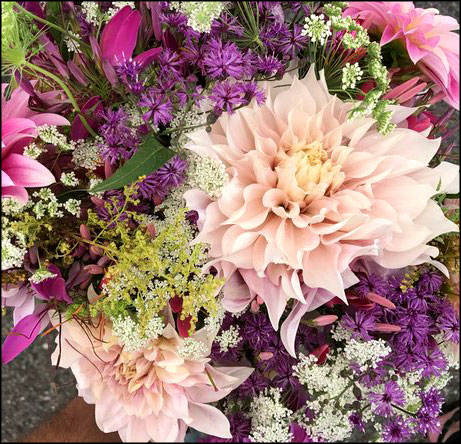 When we opened the September issue of Southern Living recently, we were surprised to find a big, beautiful dahlia staring at us from the first page of the lead article.

Dahlias like cool nights, so growing them in the South can be a challenge. But just outside zone-8a Birmingham, Deborah Stone grows them commercially for cut-flowers at her Stone Hollow Farmstead. In the article, Stone offers tips for success with dahlias in the South such as waiting until several weeks after the last frost date to plant them and giving them some protection from the hottest, midday sun.

A handful of heat-tolerant dahlias are mentioned in the article, including jewel-toned ‘Juanita’ and dark-leaved ‘Bishop of Llandaff’, and a dozen of “Deborah’s Favorite Dahlias” are pictured, including dreamy ‘Café au Lait’ (pictured here), frilly ‘Tsuki Yori no Shisha’, and deep purple, always dependable ‘Thomas Edison’.

To learn more about how you can grow dahlias in the South, see our tips from experts and customers at oldhousegardens.com/DahliasForHotNights .

When my sister and her family visited us from Massachusetts this past summer, my brother-in-law had some exciting news – after years of being plagued by red lily leaf beetles, he’d seen very few in their garden this year. The parasitic wasps seem to be working!

If these voracious beetles aren’t in your garden yet, they’re on their way. They first appeared in Massachusetts in 1992 and have since spread throughout New England and into New York, Pennsylvania, Michigan, Wisconsin, Iowa, and Washington.

To control them, researchers at the University of Rhode Island have released three species of tiny parasitic wasps. Two of these have slowly spread throughout New England, and it looks like they’re finally making a difference in my brother-in-law’s garden.

And if you’re looking for a beetle-resistant lily, Tewksbury highly recommends ‘Black Beauty’. Although adult beetles may feed on it a little, she says, the larvae never do because eggs laid on it just die.

Did You Miss Our August Newsletter? Read It at Our Website or Blog

You can read all of our back-issues at oldhousegardens.com/NewsletterArchives – and we’re adding the best articles to our blog!

Please help us “Save the Bulbs!” by forwarding our newsletter to a kindred spirit, garden, museum, or group. Or if a friend sent you this issue, SUBSCRIBE here!