“Each moment of the year has its own beauty, a picture which was never seen before, and which shall never be seen again.”

Protect Your Iris and Peonies NOW

And NOW is a great time to order!

Although 51 varieties are already sold out, we still have plenty of amazing heirlooms for you to enjoy.

Easiest of all are our samplers, including our ever-popular Intro to Heirlooms.

Winter is coming – but so is spring! – and you’ll enjoy both of them more if you treat yourself to some of our fabulous fall-planted beauties now.

Heirloom bulbs are survivors, but even we were surprised by these two reports:

Here’s what our good customer Marianne Schmidt of zone-5b Stuyvesant, NY, had to say about one of our most fragrant tulips – although please note that we can’t guarantee it will work for you:

“Last spring the deer devoured all of my tulips EXCEPT ‘Generaal de Wet’. I don't know if it was the fragrance or color that turned them off, but this year I'm pinning all of my tulip hopes and expectations on this beautiful tulip!”

And though we’d never recommend planting tulips THIS late, we were happy to get this news about one of our oldest tulips from our long-time customer Tara Fitzpatrick of zone-6a South Hadley, MA:

“Testimony for your ‘Couleur Cardinal’ – I forgot a bag I had intended to force inside in the basement fridge all winter. I found and planted them in the garden in March during a thaw, and they bloomed perfectly in May!”

Protect Peonies and Iris with an Easy Fall Clean-Up

For healthier plants and even more flowers, give your peonies and iris a simple fall clean-up.

PEONIES – Although peonies are generally care-free, they can be afflicted by powdery mildew (pictured here) and other fungal diseases. To prevent spores from overwintering, cut peony stems as close to the ground as possible, carefully bagging everything as you go, and dispose in the trash instead of composting. For best results, do this earlier rather than later, before the leaves dry up.

IRIS – Fall is also the best time to control iris borers. Borers hatch in spring from eggs laid in fall on iris leaves and anything similar that’s close by. To destroy them, simply wait until after a good hard frost kills the adult moths and then (a) cut back all leaves to a couple of inches and (b) remove, bag, and trash – don’t compost – the clippings and any debris or mulch that’s near the plants.

Simple, right? And your plants will reward you!

No, that’s not a typo in the title above. We recently learned that the dahlia we’ve always known as ‘Little Beeswings’ – with an “s” at the end – is actually ‘Little Beeswing’ – without the “s.”

Whatever you call it, this cheery little pompon dahlia has been a favorite of our customers ever since we first offered it in 2003. And this past July it was a hit at the RHS Hampton Court Flower Show where it was part of a display by Plant Heritage, the world’s leading non-profit devoted to preserving garden plants.

As Lucy Pitman explains at the Plant Heritage blog, “‘Little Beeswing’ has been offered in the Plant Exchange for several years by a National Collection Holder in Cambridgeshire, he having obtained his original plants from Scott Kunst of Old House Gardens in Michigan. Because this bright Dahlia was flowering so beautifully in perfect time for the RHS Hampton Court Flower Show, it became the star of the show in the Plant Guardian display.”

The National Collection Holder she credits is our good friend Alan Shipp, the Noah of hyacinths, who’s been growing ‘Little Beeswing’ ever since we sent it to him years ago. When Lucy asked Alan about its history, he sent her to us, and after several hours of research in the OHG library and online, here’s what we think we know.

‘Little Beeswing’ (the earliest spelling of its name) was introduced in 1909 (not 1886 or 1938, as some sources indicate) by Keynes, Williams, and Co. (not J.K Alexander), a celebrated nursery in Salisbury, England (not Australia) that introduced dahlias from at least 1863 to 1938. It apparently made its way to the US soon after (not in 1938 as Lucy believed when she wrote her blog). By 1916 it was noted as “new” in a list of “best dahlias” published by the New York Agricultural Experiment Station, and in 1917 it was mentioned in the Bulletin of the Dahlia Society of California.

Learn more at Lucy’s blog post, or simply order ‘Little Beeswing’ now for spring planting. If it can shine at the Hampton Court Flower Show, just think what it can do in your garden! 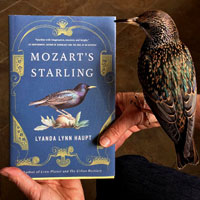 The past is full of surprises, and so is Nature.

Did you know, for example, that Mozart had a pet starling that he loved so much that he held an elaborate funeral for it when it died? Lyanda Lynn Haupt turns this historical tidbit into a fascinating book that’s part biography, part nature study, and part detective novel, as well as a heart-warming memoir of Haupt’s life with her own pet starling, Carmen.

Although starlings today are one of the most reviled birds in North America, outcompeting native birds and destroying some $800 million worth of crops, in Mozart’s time they were often sold as pets. One day as he was walking down the street, Mozart was surprised to hear a starling whistling a phrase from his brand-new piano concerto. Delighted, he brought the bird home where it soon became, in the words of one reviewer, “his companion, distraction, consolation, and muse.”

Starlings, it turns out, are bright, inquisitive, playful, highly sociable, and extraordinary mimics – much like Mozart himself. They are closely related to mynas, and their songs, which have always sounded like random squawking to me, are actually bits of mimicked sounds they weave together into complex, individual compositions.

Haupt’s pet Carmen mimicked everything from the beeping of the family microwave to phrases such as “Hello, honey.” She also turned “my household and my brain completely upside down,” Haupt writes, leading her on a pilgrimage far beyond anything she had envisioned. Their surprisingly intimate relationship gives the book its emotional heart and reminded me of books I once loved such as Rascal and The Yearling.

Mozart’s Starling is both entertaining and inspiring, and you’ll learn a lot from it about birds, Mozart, creativity, animal intelligence, and what we all have in common with wild creatures – including those you may have once scorned as nothing more than pests.

Did You Miss Our Early September Newsletter? Read It Online!

Early September’s articles included peonies and “Pumpkin Spice gardening,” loving Henry’s lily, moving Boise’s giant sequoia, Alan Shipp’s rarest hyacinths return, and more. You can read all of our back-issues at oldhousegardens.com/NewsletterArchives – and we’re adding the best articles from to our blog!