“Gardening takes a plot of land, a hoe, and willing muscles. Scratching the soil, harvesting garden fruits, are peaceful results. With a garden, there is hope.”

Has Our New Catalog Reached You Yet?

It’s the first one by the NEW Old House Gardens, and we don't want you to miss it!

We mailed them August 21, so if you either (a) ordered bulbs anytime since fall 2015 or (b) paid $2 for it anytime since last November, it should be in your hands at the latest by this Friday.

It’s almost “game time” for us, and we’re eager to begin.

But since bulbs are already in big box stores, why don’t we ship ours earlier?

Mainly because it’s better for the bulbs. All bulbs have to mature and dry after harvesting, especially daffodils which need to lose over 20% of their weight in moisture – and this takes time. But big box stores want to sell as many bulbs as possible before they start ramping up for Halloween, so mainstream growers have been forced to ship bulbs before they’re ready. Sometimes it works, sometimes it doesn’t – and we don’t want to take that risk with our rare jewels.

We hope you understand, and thanks for your patience! 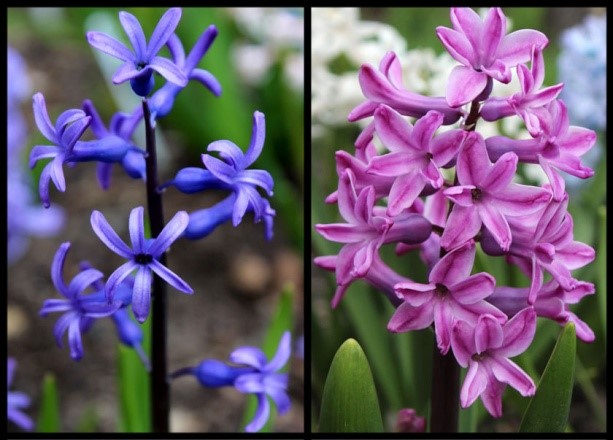 Last fall Alan Shipp had NO hyacinths to offer us, after losing thousands of bulbs in what he called a “disastrous” spring.

Although it will take him years to fully rebuild his stock, this fall he’s sending us very small quantities of seven extra-rare jewels, and we just put them for sale online minutes ago.

Since we’re getting just 20-30 of most of these, they won’t last long – so NOW is the time to order them!

So why isn’t this wildly popular drink offered year-round, asks Joseph Tychonievich in the current issue of Michigan Gardening. Because then, he says, “we’d drink it, grow tired of it, move on, and forget about it. The fact that this special drink only comes around once a year makes it special.”

And we gardeners can learn from this, Joseph says. “Often in the garden we gravitate to things that bloom or look good for as long as possible,” but “gardens aren’t some math problem. . . . The really important harvest is not flowers or even food, but joy. So maybe it is time to step back a little from all of the long-blooming, forever-performing plants and embrace flowers that . . . instead inspire us with wild joy, anticipation, and glee.”

His top suggestion, we’re happy to say, is peonies – and we’re offering more than ever this fall! Although they don’t bloom forever, “for a few glorious weeks in late May or early June, they’ll positively cover themselves with huge, extravagant, powerfully fragrant flowers.”

“You'll look forward to that . . . all year long. As the buds swell, you'll check them each day. When they finally open, you'll sit next to them drinking in the rich scent. You'll cut armloads of them. . . . You may even throw a party in their honor.”

Of course “it doesn’t have to be peonies,” Joseph adds. “Find a plant that you truly love, that really thrives and performs in your garden, ignore the fact that it only blooms for a couple weeks in a year, and then plant them by the dozens and revel deeply in the sheer magic of their performance.

“Don't let anyone tell you they aren't practical. Gardening is about passion, not practicality. . . . Remember the lesson of the Pumpkin Spice Latte and keep some magic and anticipation in your garden.” 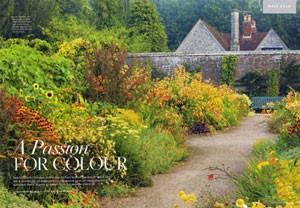 Underappreciated Henry’s lily is one of my favorite lilies, so I was happy to see it featured not once but twice in the September 2017 issue of The English Garden.

In the gardens at Lamport Hall in Northamptonshire, “history and heritage meet modern planting techniques” in the style of Piet Oudolf. There “the soft orange flowers of Lilium henryi are used abundantly throughout the herbaceous borders,” combined with great swaths of hollyhocks, agapanthus, and American natives Joe Pye weed and Rudbeckia.

Henry’s lily also plays a major role at West Dean Gardens, a “formidable horticultural powerhouse” in West Sussex. A glorious two-page photograph of the historic walled garden there shows it blooming exuberantly in the Hot Border which “smolders across the length of the kitchen garden’s greenery.” (See a much larger version of this photo at our blog.)

Henry’s lily “grows like stink and is a real good do-er,” says gardens supervisor Sarah Wain. In fact, it’s one of the “stalwarts” of the border, along with “heleniums ‘Butterpat’ and ‘Moerheim Beauty’, daylilies, Solidago, Sedum, Heuchera ‘Palace Purple’, Potentilla ‘Gibson Scarlet’, and Rudbeckia fulgida.”

California poppies, nasturtiums, and ‘David Howard’ dahlia also figure prominently in the border, along with Crocosmia ‘Lucifer’. As luck would have it, I planted a clump of ‘Lucifer’ next to the Henry’s lilies in my backyard this summer, and though it wasn’t quite West Dean’s Hot Border, they did look great together.

Henry’s lily is one of four we now ship in the spring. To see how great it can look in your garden, order a few now!

That’s exactly what happened in Boise this past summer when Idaho’s largest and most historic giant sequoia (Sequoiadendron gigantean) – a gift from naturalist John Muir in 1912 – was moved a couple of blocks to make way for a hospital expansion.

Giant sequoias are the world’s largest trees, growing up to 300 feet tall with trunks over 25 feet in diameter, and they can live a very long time. The oldest one documented by ring count was 3500 years old, so the 115-year-old Boise tree, as one of the moving crew pointed out, is “still a young tree.”

Unfortunately Boise’s summer was brutally hot and dry this year, and giant sequoias are native to very humid regions where, according to Wikipedia, they “supplement water from the soil with fog taken up through air roots, at heights to where the root water cannot be pulled.”

Nevertheless, the Texas firm that moved the tree gives it a 95% chance for survival, and Boise’s City Forester Brian Jorgenson says he’s “cautiously hopeful.” Jorgenson checks on the tree daily, monitoring four soil-moisture testing stations and a hose running up its trunk that sprays water on the upper branches to humidify them.

Almost three years ago, the same Texas firm moved a 250-year-old oak tree here in Ann Arbor (see “Save the Oak!” and “One Year After”) and it’s still alive and well. Here’s hoping the Boise sequoia will also thrive – and outlive us all.

Did You Miss Our August Newsletter? Read It at Our Website or Blog

August’s articles included Alexander Hamilton’s bulbs, celebrating tuberoses in Transylvania, “magnificent, almost immortal” peonies, protecting yourself from garden thieves, and more. You can read all of our back-issues at oldhousegardens.com/NewsletterArchives – and we’re adding the best articles from the past to our blog!