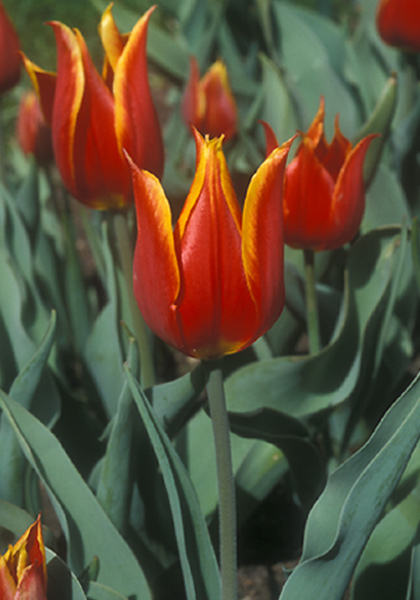 In the spring of 2001, hundreds of our oldest tulips bloomed in a small display set amid block after block of massed tulips on New York’s Park Avenue. Sponsored by the Daughters of Holland Dames and the Fund for Park Avenue, this tiny living history lesson inspired Verlyn Klinkenborg, editorial-page writer for The New York Times, to devote his “In the Country” column for April 11, 2001, to these musings:

“I know a horse trainer who says that if you could just carry square one with you, you’d never have to go back to square one. I heard that at a county fairground in eastern Wyoming, but it came back to me on Park Avenue yesterday. I was standing in the median crosswalk north of 63rd Street and there, in a small raised plot, were the first two tulips I’ve seen blooming this spring. They are a species of tulips called Tulipa schrenkii, discovered by Europeans in 1585 but native, as tulip historian Anna Pavord writes, to the steppes and low mountains of Crimea and Transcaucasia. Their presence this spring on Park Avenue indicates the growing importance of gardening with heirloom and antique plants — the botanical equivalent of carrying square one with you.

“T. schrenkii is not a dominating tulip. It has none of the height, none of the stiffness or prominence of the hybrid tulips that surround it, and which are still only in leaf. But T. schrenkii may be one of the important progenitors of the familiar monochromatic tulips, that in another week or two will display a certain unanimity all over the city. By comparison, T. schrenkii seems almost to crouch, to withdraw. It lacks the foghorn colors of modern tulips. Its sharp-tipped petals, wine-dark but edged with yellow, resemble deep, subtle flames, and it looks as though it were meant to cover entire hillsides, not to compete with the overpowering effects of Park Avenue.

“But back to square one. The variations that humans have wrought upon domesticated plants and animals are almost infinite. Inevitably, as time passes and fashions change, the origins that lie behind those variations grow dim and often forgotten, as do earlier variations themselves. Just as there is a necrology of long-gone buildings, so there is a necrology — a substantial one — of plant varieties and animal breeds that have been sacrificed as values and tastes have changed. With luck, the current fashion for heirloom and antique plants, embodied by T. schrenkii, will turn out not to be a fashion at all, but a continuing expression of the need for genetic conservation, for keeping the past alive in the most literal sense possible.”

For more of Verlyn’s poetic and thought-provoking writing, click here.