As I struggled to describe the intriguing color of ‘Red Velvet’ lily, a friend made the connection for me. “It’s like red velvet cake,” she said, and it is: red shaded with cocoa.

For a recipe we turned to one of our favorite cooks, our former trial garden manager Matthew Scott. Though his old family recipe makes a cake that’s actually a bit brighter than ‘Red Velvet’, if you use two tablespoons of cocoa instead of one, it’s close to a perfect match.

This is my Grandma Opal’s recipe. She used to make it for my dad’s birthday when he was growing up in central Indiana, and I made it again for my dad’s 60th birthday last summer. It’s an older recipe, so the layers aren’t gargantuan like many of today’s recipes.

Who doesn’t love a bright red cake? With a white icing it’s pretty spectacular. And you can always dress it up with sliced strawberries or blueberries between the layers, or top it with blueberries for some Fourth of July fun! 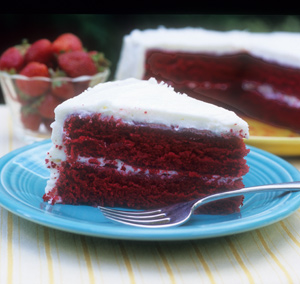 In large bowl, cream the above ingredients together well.

Sift together above ingredients 3 times.

Mix above ingredients together.

Stir a bit and then add to mixture above.

Grease and dust 2 9-inch cake pans and bake at 350 degrees for 30-35 minutes and test with toothpick.

7-minute Frosting (from The Joy of Cooking)

Have the egg whites at room temperature, 68-70 degrees.

Whisk together in a large stainless-steel bowl:

Beat on high speed for 2 to 3 minutes more to cool.

Use the day it is made.

You can also stir in 1/2 to 1 cup chopped nuts or shredded sweetened dried coconut after the frosting has cooled.

If you’re making this in the middle of summer with high humidity and no air conditioning as I have, you may need to beat the frosting a bit more than the recipe calls for.

To return to our ‘Red Velvet’ lily description, click here.