Because it’s gorgeous, old, and no one else was offering it, we re-introduced ‘Sellwood Glory’ to American gardeners in 2008. But one of the great pleasures of heirlooms is their stories, and at first we knew nothing about this old dahlia except its date of introduction, 1951.

Then our friend Linda Beutler emailed in excitement to say she’d been seeking ‘Sellwood Glory’ for years because it was named for her neighborhood by a man whose nursery once stood a few blocks from her house. Even better, she sent us an article from her neighborhood newspaper, The Sellwood Bee, in which local historian Eileen Fitzsimons tells the dahlia’s story — a tale of chance (fate?), vision, persistence, and the power of one person to make the world a more beautiful place. 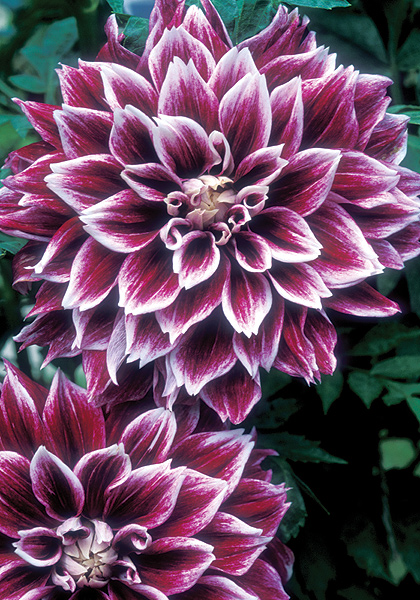 . . . I was inventorying back issues of The Bee [the neighborhood paper in the Sellwood neighborhood of Portland, Oregon] when a brief notice caught my eye.

“Dick Beyerle, owner of Sellwood Floral and Greeenhouses will talk on dahlias. He won the highest award from the American Dahlia Society for a wine-colored dahlia called ‘Sellwood Glory’.” (The Bee, Feb. 2, 1950)

As a gardener and historian, I had found a gold nugget at the bottom of a sack of coal! I was obsessed. ‘Caroline Testout’ had become our “city rose” when it was planted throughout Portland during the 1905 Lewis and Clark Exposition. But a flower named for our neighborhood? Was the dahlia still being grown, forty-six years later? Four months later, I am pleased to report that both the dahlia and 89-year-old Richard Beyerle are still with us.

In the late 1920s Mr. Beyerle was studying to be a teacher at Oregon Agricultural College (now OSU). To work his way through school he accepted employment at the greenhouses of Leading Floral Company in Corvallis. To heat the greenhouses at night he slept in the boiler house, stoking the furnace with four-foot lengths of slabwood.

Later in the Depression, the greenhouse foreman left when informed that his $4.50/day wage would have to be reduced. Although Mr. Beyerle was offered the foreman’s job, he was reluctant to accept. He felt that his college coursework in economics, sociology, and education had not prepared him to manage five 40 x 100 greenhouses full of plants under various growing conditions. However, jobs were scarce and he took the position. He sought advice from the horticulture department at OAC, and read trade periodicals such as Floral Review and Design. It was while working for Leading Floral that he noticed a curiously marked dahlia in a field, a sport or mutation of ‘Ballego’s Glory’ [a red and yellow bi-color dahlia introduced in 1931]. He received permission to cultivate the dahlia, to determine if the markings would remain constant.

After 21 years at Leading Floral he decided to go into business for himself. Richard and his bride Hazel began looking for a greenhouse of their own. On January 1, 1947, the newlyweds moved and began operating their business on Nehalem [St.], between 16th and 17th [Avenues], which continued for 25 years. . . . Hazel and Richard did most of the work themselves, hiring local women to help during the busiest times. Later, their three children Bob, Beverly, and Barbara assisted, starting at a very early age by unfolding nursery bands for the plants.

In the meantime, Richard continued to cultivate the intriguing dahlia which he had been given when he left Corvallis. . . . In 1949, Mr. Beyerle’s dahlia, which he named ‘Sellwood Glory’, won the Derrill Hart Award [bestowed annually by the American Dahlia Society on the best new cultivar based on scores from trial gardens across the country]. . . . It was described as “mahogany, overlaid purple, suffusing to distinct white edging of each petal.” The dahlia also earned awards from both American Home and Sunset magazines.

Although Mr. Beyerle and his children continue to grow the dahlia, it is presently [in 1996] unavailable through commercial sources. . . . Of the three tubers I obtained [from a private grower], two are being grown by gardening friends in the neighborhood. The other two — one from Mr. Beyerle himself — are growing in my garden. Once the supply is increased, we will begin sharing it with other gardeners. It is a beautiful plant which deserves to be grown, especially in its very own neighborhood!

Thanks to Eileen Fitzsimons for allowing us to share her article here!

In a follow-up email, Linda Beutler added that “once Eileen discovered his whereabouts, she encouraged Mr. Beyerle to attend Sellwood’s annual ‘Sundae in the Park’ event (25¢ ice cream sundaes, to this day!), and he would sit with her in the historian’s booth and visit old friends, and meet admirers of his plant, such as myself.” Mr. Beyerle retired in 1972 but continued to garden avidly until his death in July 2000 at the age of 93.

As for the dahlia itself, Linda wrote us that “Eileen has lost her own, and she doesn’t know if there are any surviving tubers from the 1996-1998 diaspora. I got mine from Eileen in 1997 and it did very well until an unfortunate accident three years later. My spouse is still anxious to replace it and restore his honor, and Eileen is even talking about putting together a community order via The Bee. We’re all excited that, thanks to you, we have this opportunity to get ‘our’ dahlia back.”