Pallida Dalmatica and Orris Root —
in Italy, Perfume, Martinis, and Your Garden

The grape-scented, lavender-blue iris known as I. pallida ‘Dalmatica’ has been used in perfumery and distillery since ancient times, and it’s still being farmed for that purpose today — as seen in the photo below taken in Tuscany by our good customer Debbie Hughes of Wellsville, Kansas.

Inspired by Debbie’s photo and with some help from Google, we discovered the Sagrona vineyard, “a small family vineyard in the heart of Chianti” where I. pallida is grown amid the grapes as it has been for centuries. As you’ll see at sagrona.com, it’s not the iris flowers that are harvested but the rhizomes. Peeled by hand and dried 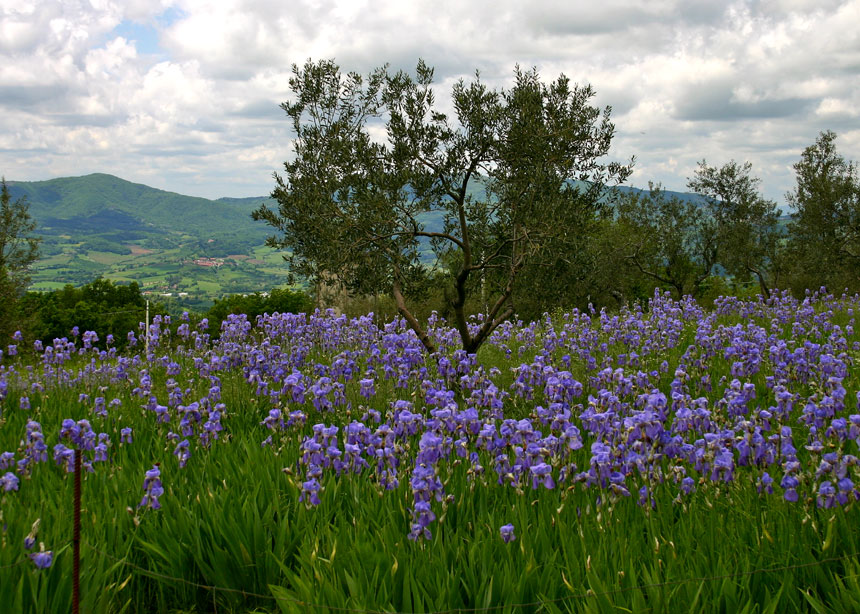 for two to five years, the rhizomes develop a violet-like scent and fixative properties that preserve the chemical structure of other fragrances, prolonging their aroma. A ton of dried rhizomes — known as orris root — yields
4½ pounds of a thick, oily, and very expensive substance known as orris butter which is still widely used in making high-end fragrances — and gin.

In her best-selling The Drunken Botanist, Amy Stewart explores hundreds of “plants that create the world’s great drinks,” including iris. She writes:

“The pharmacy and perfumery of Santa Maria Novella, established by Dominican friars in Florence in 1221, gained notoriety for its use of the rhizomes of iris. They were not the first — Greek and Roman writings mention it — but their perfumes, cordials, and powders contained liberal doses of this rare and precious substance.

“Orris was popular not so much for its fragrance — although it does contain a compound called irone that gives it a faint violet smell — but as a fixative, holding other fragrances or flavors in place by contributing a missing atom that would otherwise make the fragrance volatile and easily released from the solution it is suspended in.

“None of this chemistry was understood at first. Perfumers and distillers would also not have understood why the rhizomes had to dry for two to three years before they become effective as a fixative. We now know that it takes that long for a slow oxidation process to occur, bringing about the chemical change that causes irone to form from other organic compounds present in the rhizome.

“Only about 173 acres of orris are cultivated worldwide. Most of the orris is either I. pallida ‘Dalmatica’, grown in Italy, or . . . I. germanica var. Florentina, grown in Morocco, China, and India. I. germanica ‘Albicans’ is also used in orris production.

“To extract the orris, the rhizome must first be pulverized and steam-distilled to produce a waxy substance called orris butter, or beurre d’iris. Then alcohol is used to extract an absolute, which is a perfumer’s term for a stronger version of an essential oil.

“Orris is found in nearly every gin and in many other spirits. Its popularity in perfume is due to the fact that it not only holds the fragrance in place but clings to the skin as well. It also happens to be a very common allergen, which explains why allergy sufferers might be sensitive to cosmetics and other fragrances — as well as gin.”

Orris Root in Your Garden

Gardeners have many other reasons to grow this great old iris. “Among its sterling qualities,” writes Sydney Edison in A Patchwork Garden, “are a tenacious resistance to borers, stems strong enough to support the medium-sized blossoms, and superb gray-green foliage that is an asset in the garden instead of an eyesore. . . . A wild species found originally in Dalmatia [roughly the former Yugoslavia], Iris pallida appears somewhere in the family tree of most modern cultivars but it has none of their faults. . . . I prefer this lovely, deliciously scented hand-me-down to all other tall bearded irises.”