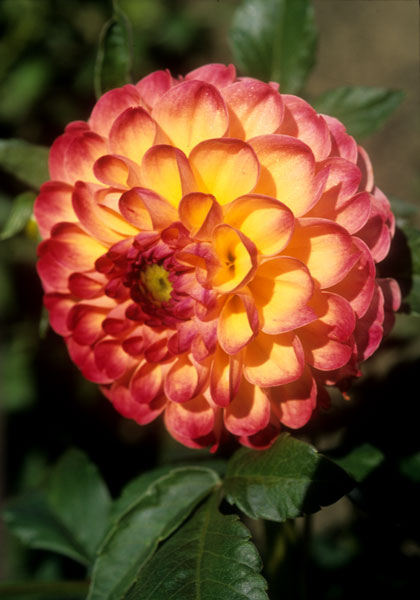 Once upon a time, dahlias rivaled the rose in popularity. Domesticated by the Aztecs, they came into US gardens in the early 1800s and soon were all the rage. East Coast socialites grew them, Idaho farmers grew them, everyone grew them. By the end of the century, over 10,000 different varieties had been introduced.

But that was then. Today, although hundreds of heirloom roses survive, Old House Gardens’ world-wide search for dahlias from the nineteenth century has turned up just six. To focus attention on this staggering loss of our garden heritage and to celebrate these six amazing survivors, we’ve named the legendary ‘Kaiser Wilhelm’ of 1881 our 2007 Spring-Planted Heirloom Bulb of the Year.

The Once and Future King

With a green button eye like an old-fashioned rose and neatly curled petals of custard-yellow brushed at the tips with burgundy, ‘Kaiser Wilhelm’ is the most antique-looking of the six Victorian survivors. Its flowers nod ever so slightly with old-fashioned grace, and each is a masterpiece of symmetry that seems to reflect the certainties of a simpler time. This rare souvenir from a lost age was preserved by Germany’s venerable Dahlia, Fuchsia, and Gladiolus Society, founded in 1897, and re-introduced to American gardens by Old House Gardens in 2001.

Time-tested and winnowed by the years, antique dahlias like the ‘Kaiser’ deserve a place in even the most modern gardens. Many have unusual colors, forms, or special qualities that haven’t been matched by more recent introductions. And like Grandma’s quilt or a 1957 Chevrolet, they connect us with our roots, add diversity to our lives, and allow us to time-travel in our own backyards. 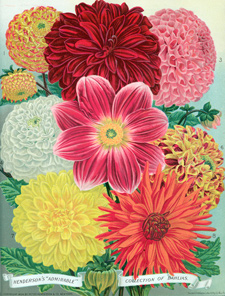 Victorian dahlias that did not
survive. Henderson catalog, 1904.

The loss of so many of these relics of our garden heritage parallels the ongoing loss of diversity in the rainforest. But, happily, every gardener can help save what’s left. Just grow one. The incomparable ‘Kaiser Wilhelm’ awaits you.

From the Aztecs to Your Backyard

Dahlias are native to the mountain plateaus of Mexico and were first brought into gardens by the Aztecs — making them one of the Western Hemisphere’s oldest garden flowers. They arrived in Europe in 1789 and by the 1830s garden books on both sides of the Atlantic were listing page after page of thrilling new varieties. Though their popularity later sagged a bit, it revived with the introduction of mop-headed cactus forms in the 1880s, and in the 1920s F. F. Rockwell reported that dahlias ranked in “the leading position of all bulbs grown in America.”

Transforming Fall with a Crescendo of Bloom

The Victorians called dahlias “The Queen of the Autumn Garden.” In late summer when many other plants are winding down, dahlias just keep getting better and better, building up into a crescendo of bloom that can make fall almost as exciting as spring itself. They offer opulent flowers with lush colors and astonishing forms, and the more you cut them for bouquets, the more they bloom.

As Easy as Tomatoes

It’s true, dahlias are as easy to grow as tomatoes. Full sun suits them best, but seven or eight hours will do. Yes, you’ll have to stake them, but that only takes a few minutes through the summer. And no, you don’t have to dig them up in the fall — it’s not a law in any state. When they freeze dead (they’re winter hardy in zones 8 and warmer but grown almost everywhere as annuals), just compost them like you do your tomatoes.

For complete guidance (including the easy Saran Wrap method for gardeners who do want to dig and store them in the fall), see our Planting & Care.

And for special advice on growing dahlias where summers are hot, see our Dahlias for the South page. 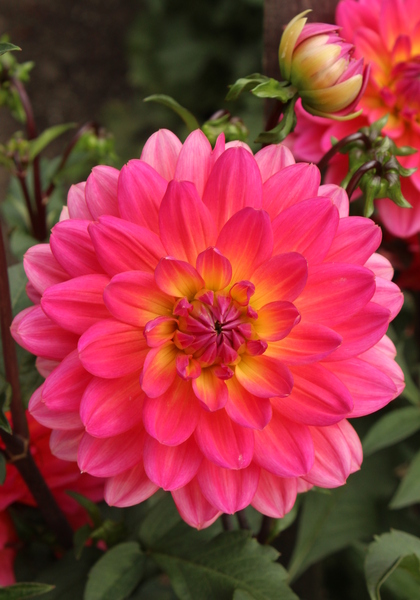 The Five Other Victorian Survivors

‘Nellie Broomhead’, 1897. This vibrant, almost neon rose-purple jewel came to us from a renowned dahlia collector in Japan.

‘Tommy Keith’, 1892. A pompon-like “fancy” of burgundy-red splashed with white from the UK National Collection of Dahlias.

‘Union Jack’, 1882. Also known as ‘Star of Denmark’, this single, red-and-white striped dahlia is much like its Aztec ancestors.

‘White Aster’, 1879. Pristine and exuberant, this little white pompon from Germany seems to be the world’s oldest surviving garden dahlia.