Back from Extinction:
Last “Eyed” Hyacinth Rediscovered in Romania 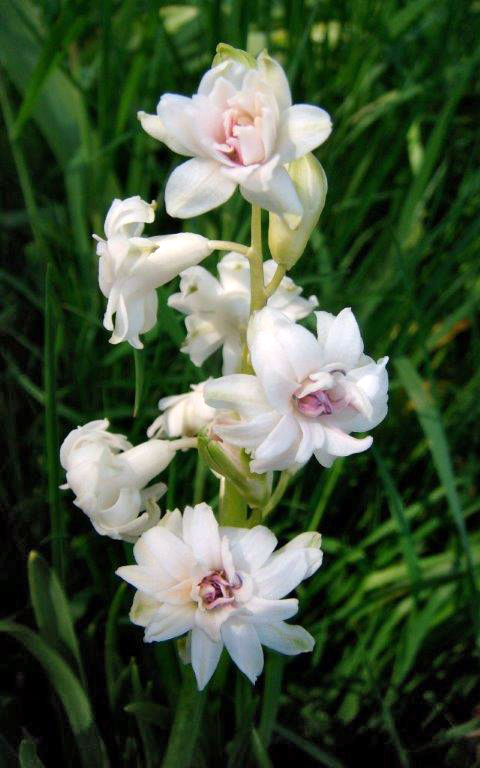 “What really is extinct?” our good friend Alan Shipp asks in the fall 2014 journal of Plant Heritage, the UK non-profit devoted to conserving garden plants. “The coelacanth was considered to be extinct,” he writes. “The ‘fossil pine’ was only known by its fossilized remains.” And then Alan tells of another thrilling rediscovery:

“In the 17th-century world of the hyacinth, double-flowered forms were considered inferior to the single ones and so were discarded, until . . . one breeder . . . discovered amongst his plants a white double with a red center. He was so charmed by this that he propagated it and . . . in 1702 introduced it. . . . By the 1730s a Hyacinth Mania had evolved to mirror that of the Tulip Mania of 100 years earlier. This was fuelled by the desirability of white doubles with various colored centers, but we considered all of these extinct many, many years ago.

“Our story now brings us to the turn of the 20th/21st centuries. A lady called Ingrid living in Switzerland had a lorry driver friend called Theo. Theo and a fellow driver took a lorry load of humanitarian aid to a remote little village in Romania where Theo’s friend met, courted, and eventually wed a local girl. Theo returned to the village for the marriage of the couple. So splendid was the hospitality that Theo gave the bride’s father a pocket watch, the recipient of which now felt indebted to Theo so told him to take anything he wished from the garden. . . . Theo selected a hyacinth bulb labeled ‘Gloria Mundi’ and on his return to Switzerland gave the bulb to his gardener friend Ingrid.

“Very fortunately for the plant world, Ingrid passed it on to Alan Street of Avon Bulbs who after he had bulked it up a little gave two small bulbs to me for the Hyacinth National Collection. There is now genetic material of it in at least six locations in the UK and one in the Netherlands. ‘Gloria Mundi’ was illustrated in 1767, and a pot of ten small bulbs in bloom was this spring awarded an RHS Certificate for plants of historic or botanical interest.

“Footnote: The garden in Romania has been located and visited this past April. The old man is dead and his son has dug up all flowers to grow vegetables. Saved just in the nick of time one might say!”

For another amazing tale of rediscovery, see Could “Double Yellow” Hyacinth Be 200-Year-Old ‘Ophir’? And learn more about the history of double hyacinths.