“I come from a family of flower lovers,” Joyce Dowell told me when she first ordered bulbs from us in 1998. Then, as gardeners often do, she offered me a start of one of her favorite plants, an old purple dahlia. “I am 74 and my sister is 84,” she told me, “and our grandmother was growing it as far back as we can remember.” 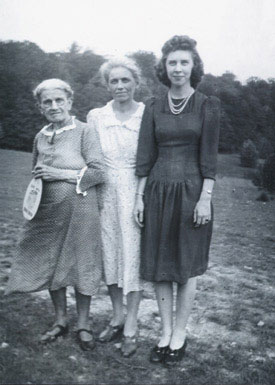 What sets this dahlia apart, she explained, is its winter hardiness. For decades she’d been leaving it in the ground all year round in her zone-6b/7a Kentucky garden, and most years it survived there just fine. To be safe, she dug and stored a few tubers of it every fall, but the plants she left in the ground would sprout so early that they’d bloom weeks and weeks before any spring-planted tubers. In fact, Joyce wrote to me on June 9 the next year saying “The old purple dahlias I left in the garden over winter are almost in bloom now. The ones I set out this spring are less than a foot high.”

Joyce even had a name for the dahlia: ‘I.D. Warner’. Unfortunately when we looked in the official RHS register which lists tens of thousands of dahlia names, ‘I.D. Warner’ wasn’t there. We searched further, though, and discovered a dahlia by the name of ‘Mrs. I. De ver Warner’. Might this be Joyce’s dahlia, its name slightly mis-remembered over the course of fifty years or more? The date of introduction was plausible, 1920, and the official description seemed close: a large-flowered, lilac-colored, decorative-class dahlia. We couldn’t be sure, but we were feeling hopeful.

Looking for more evidence, we found ‘Mrs. I. De ver Warner’ offered in a 1923 Burpee catalog in our modest  research library. Its exceptionally high price — $10 each, when every other dahlia cost somewhere between 35 cents and $1.50 — seemed to reflect both its newness and its excellence. “One of the very finest whether for exhibition or garden decoration,” the description read. “Flowers are of great size, and it is an early, continuous, and free bloomer. The blooms are beautifully formed, and a pleasing shade of mauve-pink.” Though “mauve-pink” might not seem to match the “purple” Joyce used to describe her grandmother’s dahlia, we learned when it bloomed in our trial garden that it’s a soft pinkish purple that could easily be called “mauve-pink.” 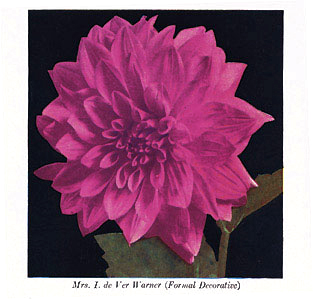 Then we found a color photo of ‘Mrs. I. De ver Warner’. Eureka! It was in a 1938 book called Garden Bulbs in Color by one of America’s leading horticulturists, J. Horace McFarland. Despite the technical limitations of printing photos in the 1930s, the color and form of the dahlia pictured are very close to that of Joyce’s dahlia, as you can see by comparing it here to the photo taken in our trial garden — or maybe not, since the dahlia’s true color is hard to capture on film and may not display accurately on your monitor. But trust us: in real life it’s pretty darn close to the color in the book!

So now we’re pretty much convinced. The first year we offered Joyce’s dahlia we sold it under the “study name” ‘Fannie Williams’, but since then we’ve offered it as ‘Mrs. I. De ver Warner’. We’d like to be 100% sure about it, though, so if you can offer us any more evidence from old books, catalogs, or your own experience, we’d love to hear from you.

“Did you ever think that flowers can be a monument to people?” Joyce asked me in one of her early letters. “In the spring of the year here you can drive around in the country and see daffodils and narcissus blooming along the road — out in fields, all over — but no house near. They tell you that once there was a home there and a loving family.”

Joyce’s grandmother was born into one of those loving families in 1861 (“a Civil War baby,” Joyce says), in a log house outside zone-6b Scottsville, Kentucky. Her family farmed, her father was a Baptist preacher, and Fannie grew up to be an avid gardener. 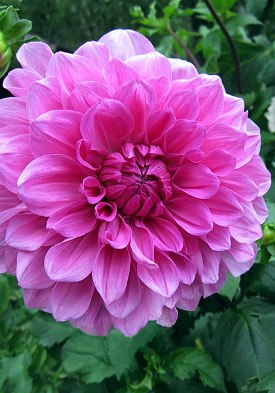 ‘Mrs. I. De ver Warner’ dahlia
in our OHG micro-farms.

“My grandparents had a large vegetable garden at the back of their house. In one corner my grandmother had a rose garden. Below that were grapes and raspberries. I guess there wasn’t room for her dahlia bed so my grandfather fixed a fenced-in place inside the yard about 9’ x 40’. She had two rows of dahlias down it. Gran helped her with stakes and strawing [mulching with straw]. Each Sunday my grandmother and Mama would fix a big bouquet to take to church. People always expected the display — maybe roses, dahlias, glads.”

Joyce’s mother continued the family tradition. “My mother had a lot of flowers, though not as many dahlias. She had one row of them across the vegetable garden. She liked zinnias, marigolds, glads. Our yard was fenced in so it was full of flowers, too. Two rows of roses across the front. Lilac, spirea, mock orange, bridal wreath, crepe myrtle, hydrangea, tiger lily and rubrum. She had a big bed of cannas. Lily of the valley, peonies, sweet violets, chrysanthemums. When iris began to come around she really went into them. That is one of my favorites, too.”

Joyce is still gardening today, with the help of one of her flower-loving sons, and sharing plants as gardeners have done for centuries. “My son got the garden plots worked up and laid off. I have been busy setting out flowers — petunias, sultana, etc. A friend of mine came to get some dahlia bulbs. (I don’t know why I only have the purple dahlia left of all the old ones. I know that I tried to save them all after Mama had them.) She brought me a bunch of old time petunia slips. My grandmother and mother had them — white on to lavender colors, would come up from seed each year. I lost out on them, though, so was really glad to get a start again. Do you have them? If not, I could send you some.”

And that, at its simplest and most personal, is what saving our shared garden heritage is all about: one gardener passing along to a kindred spirit a start of something she loves.

We hope you’ll join Joyce in continuing that tradition, preserving and sharing her ‘Mrs. I. De ver Warner’ and other living heirlooms — especially those that, like your grandfather’s rocker or your great aunt’s cookie recipe, have special meaning to your own loving family.

We’re sure glad Joyce did.

This old dahlia was a treasured heirloom in the garden of another family just 100 miles away from Joyce and her family. Read their story at “Rediscovering Papaw’s Hardy Lavender Dahlia.”