To learn more, see our Canna Newsletter Archives and Why We’ve Stopped Selling Cannas (Except One).

Cannas Through History — And Today

Cannas reach their full majesty in late summer and hold their blooms high till the first frost — brave torches of tropic heat and plenty. Though scorned for much of the 20th century — along with all things Victorian — they’ve become cool again, and we’re glad! 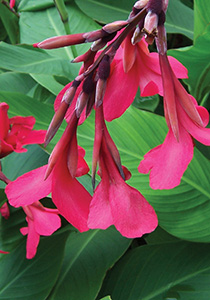 Natives of the New World tropics, cannas were brought to Europe by the late 1500s, and John Parkinson in his great florilegium of 1629, the Paradisi in Sole Paradisus Terrestris, described two varieties, one yellow with red spots and the other this:

“Canna Indica flore rubro. Red flowered Indian Reede. This beautiful plant riseth up with faire greene, large, broade leaves, every one rising out of the middle of the other, and are folded together, or writhed like unto a paper Coffin (as they call it) such as Comfitmakers and Grocers use, to put in their Comfits and Spices, and being spread open, another riseth from the bottome thereof, folded in the same manner, ...as I have observed in mine owne garden.

“The flowers grow at the toppe of the stalke one above another, which before their opening are long, small, round, and pointed at the end, very like unto the claw of a... Sea-Crab, and of the same red or crimson colour, but being open, are very like unto the flower of Gladiolus or Corne-flagge, but of a more orient colour than at the first, and standing in a rough huske . . . .

“These plants grow naturally in the West Indies, from whence they were first sent into Spaine, and Portugall....We preserve them with great care in our gardens, for the beautiful aspect of their flowers.”

Cannas boomed in the late 1800s, when Victorian gardeners were celebrating all things exotic. At the 1893 Chicago World’s Fair — the Columbian Exposition — huge crowds and rave reviews greeted an enormous planting of cannas, as described by Liberty Hyde Bailey in Garden and Forest: 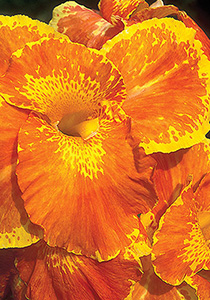 “The lawn of the Horticultural Building was centered on a huge lily pond and cut into seventy-nine beds, all but three of which are planted to Cannas. This great display of Cannas, extending over a total length of a thousand feet, is now the most conspicuous feature of the environs of the Horticultural Building. The plants were late in going into the ground, and the soil is sandy and poor; yet the display, as a whole, is very bold at the opening of September, and it certainly has great merit.

“The varieties... represent the best of the new French or dwarf Cannas, a class of plants which has been greatly improved in very recent years, especially in the best qualities of bloom.... J.C. Vaughan [a prominent Chicago mail-order nurseryman] shows eighteen beds of Cannas — the central bed in the south area being the best.... The central portion of this bed is occupied by a heavy planting of Florence Vaughan...” — which Bailey calls one of the “best Cannas” on display. Twenty-five other celebrated varieties of cannas filled the other 78 beds.

Unfortunately of all of these, only one seems to survive — flamboyant ‘Florence Vaughan’, a living souvenir of the 1893 World’s Fair for you to grow in your own garden today. 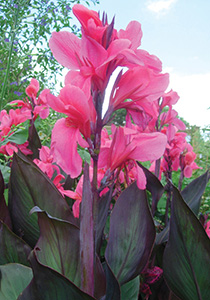 At the turn of the century, stylish gardeners began turning away from exoticism in favor of old-fashioned flowers and pastels. Though plenty of gardeners were still planting cannas, Neltje Blanchan in her 1909 American Flower Garden turned up her nose at them — though she couldn’t quite help but admire them anyway:

“What shall be done with cannas? They give bold, brilliant colour effects which are at once their glory and the despair of anyone who tries to reconcile the tropical-looking plants to the vegetation in a northern garden.... Their rich bronze green or brownish maroon leaves are as valuable as their gorgeous flowers, haunted by hummingbirds that feast in the deep nectar-filled tubes.”

By 1927, cannas were horticultural bell-bottoms, and F. F. Rockwell in his Book of Bulbs was almost apologetic in his praise of them:

“Here is another fine thing which suffers undeservedly, merely because of the rut we so easily fall into in using garden material. Years ago, when the canna was planted for its ornamental, tropical-looking foliage, and the insignificant spikes of bloom were entirely a secondly consideration, ‘Indian Shot,’ as it was then called, was used almost entirely for bedding purposes. Many of the newer varieties, particularly those developed by the late Leon Wintzer of West Grove, Pennsylvania, who spent a considerable part of an energetic lifetime perfecting this flower, are extremely beautiful [including ‘Wyoming’ and ‘Shenandoah’]....” 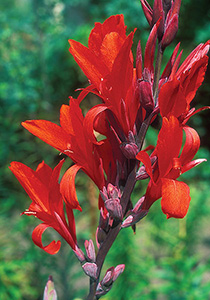 Victorian houses have been back in vogue for quite a while now, and Victorian plants are on the upswing, too: coleus, fuchsias, ornamental grasses, variegated anything, and cannas. Horticulture gave its seal of approval in an August 1997 cover story by Wayne Winterrowd:

“The plants that I chiefly remember [from childhood summers in Shreveport, Louisiana] are the cannas. They were rather coarse plants, perhaps six or more feet tall, with great, elliptical, blue-green or bronze leaves, surmounted by rather smallish flowers of burnt orange, vibrant red, or orange-speckled yellow [the red could very well be our ‘Robert Kemp’]. They throve in the sour, old soils of the back alleys. None of the good gardeners I knew then — grandparents and many gardening aunts and uncles — would ever have thought of bringing them into the garden. They were simply the ‘garbage can plants,’ and no one knew how they had got there.

“They may be there still, for a canna, where it is hardy, is an incredibly tough thing. But it has been 50 years since I threaded my way through Shreveport’s back alleys.... Fortunately for modish gardeners, cannas are, at the moment, very fashionable plants. Happy (or at least rather smug) then are we who have grown them all along, apologetically and embarrassedly in out-of-the-way places or in pots, and now can plant them in the border with panache.”

Though cannas are tough enough to grow just about anywhere, they really shine when given plenty of these four essentials:

1. Water. This may be their most frequently neglected need. Double — or triple — your watering of them and see how they respond.

2. Fertilizer. They’re “gross feeders” (like some friends I had in junior high), so I top-dress with a handful of tomato or rose fertilizer when planting and maybe twice again during the summer.

3. Warmth. I also wait for June to plant them here in zone 5, which is a couple of weeks after most people have planted their peppers and other very cold-sensitive plants — and I often start them in pots indoors.

Also, deadhead with care. Cutting off the bloom stalk when it’s finished blooming and starts to form seeds will help conserve the canna’s energy for future bloom, but be careful because there’s usually another cluster of blossoms — sometimes two — starting just below it on the same stalk.

In warm areas, canna leaf-roller caterpillars can be a problem. Heirloom cannas are often more resistant to this pest, but if necessary you can control it with Bt or a judiciously applied insecticide. Learn more here.

After frost “blackens” the leaves in the fall, IF you want to save the rhizomes for re-planting the next spring, cut the stalks off a few inches above the ground and dig the rhizomes. There’s no rush; the ground will protect them from freezing, usually for weeks. You can then either (1) leave the rhizomes in clumps with soil intact, pile them up someplace that’s cool but not freezing, and cover with plastic, or (2) wash the rhizomes, divide them, let them air dry for a day or two, maybe give them a dusting of garden sulfur (a low-toxicity fungicide), and then store them with some peat moss, perlite, or coarse vermiculite in plastic grocery bags or covered plastic storage boxes to keep them from drying out. A temperature of 40-55ºF is best; do not allow them to freeze. Check every now and then and either allow excess moisture (look for condensation) to escape or if they seem to be shriveling sprinkle some water on the rhizomes. You will probably need to experiment to find what works best with your conditions.

In zones 8-11 (with lows to 10°F) — and often in zone 7 — cannas can be left in the ground all winter. Leave the stalks intact and mulch with 6-12 inches of leaves, straw, etc. Thin clumps every few years for best performance.

To learn more, see our Canna Newsletter Archives and Why We’ve Stopped Selling Cannas (Except One).