The clothes catalogs have already started hawking their fall and winter wear.

So you shouldn’t be surprised to have to pause in the heat of summer to look for the latest spring fashions for your garden.

Spring-blooming bulbs must be planted in fall, or they won’t bloom in March. And most bulb companies sell out of their best spring-blooming bulbs by September, thanks to the huge crush of northern gardeners who want to get bulbs in the ground before the first October freeze.

Don’t make me harangue. I’m tired of haranguing. Just get off your bazooty and order your spring bulb garden as soon as possible. . . . 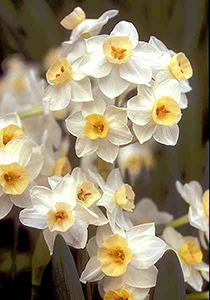 I hope you remember the selection of Gulf Coast All-Star narcissus we mentioned last spring, starting with the grandly fragrant Grand Primo in early February, the incomparable Campernelles at Mardi Gras, and continuing through a sweet selection of jonquils, Carlton, Sweetness, Avalanche, St. Keverne, and a breath of fresh white Thalia at the end of March.

I know of only one place where you can order all these varieties of Mobile-proven narcissus — from Old House Gardens, a catalog that specializes in keeping old-fashioned, regionally adapted bulbs alive and in the gardening trade. . . .

Many of Mobile’s most famous narcissus are simply not available from any source other than Old House Gardens. Their catalog has many other varieties of daffodils you’ll want to tuck in here and there for experiment. Unlike many bulbs sellers, Old House Gardens is painstakingly honest in reporting how a bulb will grow in our climate, so you can use their recommendations fearlessly.

A Tulip for Mobile, T. clusiana

And don’t stop with the narcissus. Thanks to the kind pestering of Scott Kunst, the founder of Old House Gardens, I’m learning that spring isn’t just for daffodils.

had given up on any form of tulips for Mobile, until Scott beat me over the head with his selection of the old-fashioned “candy-striped” species tulip, Tulipa clusiana. I’d tried various strains of this tulip before, without much success, and so gratuitously threw a few of Scott’s candy-stripers into some poor dry soil at the corner of my yard. I figured maybe my wife would get a brief kick out of them.

true ‘T. clusiana’, “each year
better than the last”

Now I’m kicking myself that I didn’t start planting candy-stripe tulips years ago. They’ve come bursting out of the ground three springs in a row, each year better than the last. (For those of you new to Mobile, virtually all other tulips have to be treated as throw-away annuals — if you’re lucky, they bloom for a week, and then they’re good only for the trash.)

No, candy-stripe tulips aren’t the ponderously artful Rembrandt tulips popular up north. But these perky little peppermint sticks, creamy white and cherry red, have got their own pizzazz. And because they’re so closely related to the original wild species, candy-stripe tulips are actually much cooler than tulips as you know them: Each flower starts the morning as a perfectly upright and circumspect tulip cup. But as the sun peaks, candy stripes spread their petals into wide peppermint stars, before quaintly folding into vases again at evening (this showy little surprise has been bred out of most modern tulips, which are as rigid as a Styrofoam cup).

Before you strike off in search of candy-stripe tulips, remember that you’ll need to get Scott’s true-to-type Tulipa clusiana, and you’ll need to treat your tulips pretty much as I’ve treated mine. They must be planted in very well-drained soil that stays as dry as possible during summer — mine are in a raised bed of gritty soil, intertwined with the greedy roots of a farkleberry tree, and of course, I make it a point never to water that area in summer. Maybe you don’t have a farkleberry — and I’m sorry for that — but the nooks and crannies among the heaving roots of an old live oak would be a really wonderful place to grow candy stripes, too. (But do plant them so they get plenty of low southern sun from January through April).

I don’t know why I should be so surprised that the Spanish bluebells have been so beautiful in my March and April garden for the past few years. Smart Southern gardeners have been growing them for the better part of a century, but I remained a dullard until Scott (who lives way up in Michigan!) alerted me to what I’d been missing. Maybe because they’re native to the hottest corner of Europe, these bluebells seem unbothered by our warm springs (unlike the English bluebells sold by many bulb companies, which don’t stand a prayer here).

I think they’re at their best when planted so that their delicate blue bells spread out in large sweeps, under light springtime shade.

Scott’s also showcasing a verified strain of the Byzantine glad that has become legendary in old Southern gardens. Because of its early bloom time, sturdy constitution, and absolutely Byzantine flowers, this has long been one of the South’s most cherished gladiolus, coveted even by gardeners who didn’t particularly like glads. 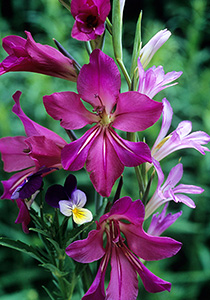 Unfortunately, unless you managed to find one out of an old garden, it was practically impossible to come across the true Byzantine glad (once again, the big bulb catalogs tried selling second-rate impostors as the real thing).

After years of coordinating with growers, Scott has finally succeeded in bringing this true strain to market.

And it took both Scott and the gardeners at Yucca Do out in Texas to persuade me to try the classic white freesia. Freesias you know because they’re always showing up in those fancy assortments of cut flowers, and most of those high-bred beauties would have no tolerance for Mobile’s climate. But the original Freesia alba, the species from which the florist freesias derived, is a little more tolerant of our growing conditions, and fits a special niche in our gardening season.

Starting the first warm days of February, this dainty little freesia begins to bloom its heart out. As is the case with camellias blooming at the same time, the flowers will burn severely if we get a hard freeze. But the low leaves — they’re iris-like and about a foot high — usually survive to send up still more stems of 18-inch flower stalks, and the plant continues to bloom through the end of March.

To make sure I get the most from my freesias, I plant them on the south or east side of my house, just on the edge of the skirts of larger, long-legged shrubs. The shrubs overhead protect the leaves from the worst of winter, and the flowers make a pretty white wreath that hides the shrub’s bare bottom.

As with nearly all spring bulbs, freesias are going to do best in soil that’s moist in spring, but as dry as possible in summer, so the greedy shrub roots are an added benefit. Gardeners closest to the coast should have the most success with freesias. Folks in the interior counties should consider freesias for pots or for experimental use only — it may not be worth the effort in areas with frequent hard freezes in February.